Are Drive-Ins on the Rise? 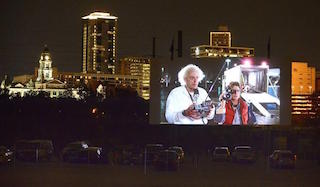 Thanks, in part, to digital cinema technology, drive-in theatres are on the rise. According to the United Drive-in Theatre Owners Association, as of this month there are 324 drive-in theatres in the United States, 299 of which are digital, with a total of 595 screens. Though the numbers will likely never be as high as they were in the 1950s when the nation had more than four thousand drive-ins, the association says the drive-in business seems to be on an upswing. Coyote Theatres is a case in point

Coyote Theaters is solely dedicated to drive-in sites and expanding across the southern USA. Beginning with a four-screen drive-in theater completed in 2013 in Fort Worth, Texas, owner Glenn Solomon sees the potential for this reinvigorated exhibition business model, and noted that it requires an experienced team to design, install and support a first-rate venue, capable of delivering an enjoyable experience to movie-goers, based on dependable digital projection technology. With the recent opening of a new Coyote Drive-In Theater, also with four screens in Leeds, Alabama, Christie and Entertainment Supply & Technologies continue to assist Solomon in bringing back a modern version of an American classic entertainment venue.

“The newly constructed Coyote Drive-In Theater and Canteen plays second fiddle to no one,” said industry veteran Barney Bailey, president & CEO of ES&T, “including an indoor restaurant, outdoor covered pavilion, and boasts excellent projection and sound, as well as first-class food and beverage services. It is clearly a winning business model that Glenn Solomon and his executive management team have put together on behalf of Coyote Theaters.” 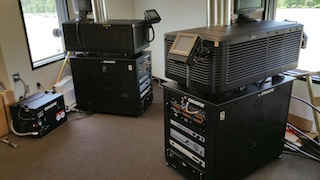 “I’m very pleased with the project results from ES&T, which brought to the table a strategic viewpoint and equipment recommendation that considered all facets of our business, including design consultation, installation, and ongoing support,” Solomon said. “Along with my management team, ES&T supported our progress every step of the way, which included the use of Christie digital projectors. Since opening day, our audiences have been very impressed by the clarity and color rendered in the great outdoors by the Christie projectors and related projection equipment.” 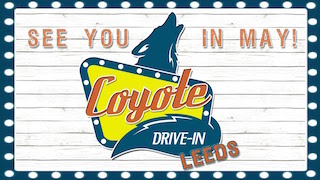 Solomon plans more venues, including a six-screen installation opening in fall 2016 in the North Dallas area – five screens at time of opening. ES&T and Christie are his go to team for this venture as well. “George Scheckel and Scott McCallum of Christie have always supported the ES&T agenda to provide our mutual clients with rapid response and problem solvers for any technical aspect or challenge, so we look forward to continuing with the Christie success train on our future installations,” added Bailey.

“Nostalgia, romance and freedom are the hallmarks of drive-in theaters,” said Scheckel, Christie’s senior director for Christie’s Entertainment Solutions group. “With more than 90 years serving the exhibition community, Christie understands first-hand the challenges of drive-in theaters and is confident that experienced partners like ES&T are able and eager to ensure their success, preserving this important legacy of cinema history.”

ES&T housed the four projectors in a single enclosure, sitting in the center of the project site, aimed out at the four screens. A single projection booth prewired enclosure eliminated the need for the traditional, one projector per booth format, with all of the attendant electrical and communication lines buried in a single trench. ES&T chose four Christie CP2230 digital projectors as the most effective to ensure maximum lighting for the Coyote 4 Drive-In project.

“Screen throws ran from 325 feet to 690 feet but in spite of the distance, audience feedback praised how sharp and bright the images on the screen were,” said Bruce Schneiter, senior vice president of Technical Services at ES&T.  “Christie was our first choice, because they have always provided top-level products and service, and they stand behind everything they offer.  They are unparalleled for their technical expertise and support of our clients projects.”