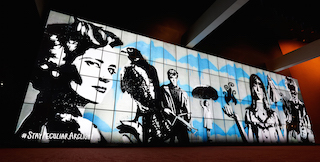 ArcLight Cinemas has unveiled a massive video wall in the lobby of its Sherman Oaks theatre in Los Angeles. Called the ArcLight StoryWall, the nearly 50-foot wide feature was installed and is being managed by Cinema Scene Marketing.

“ArcLight has always provided an unparalleled moviegoing experience for film lovers because ArcLight is more than just a place to see a movie, it’s an experience,” said Gretchen McCourt, executive vice president at ArcLight Cinemas. “Our poster wall has been a staple to the ArcLight experience and now, in working with Cinema Scene, we’ll be offering our guests an even more immersive and digitally visual experience with the debut of the ArcLight StoryWall.”

Cinema Scene provided the hardware and managed the installation for the StoryWall and will provide ongoing software service and technical support. For the StoryWall, ArcLight will manage the content, which will vary and feature vibrant images from new releases produced by the movie industry’s top studios.

The first feature highlighted in the StoryWall’s presentation is Miss Peregrine’s Home for Peculiar Children.

“Cinema Scene is elated that the reality of the ArcLight StoryWall is now live,” said Joe Ross, managing principal of Cinema Scene Marketing. “This massive digital wall will enable studios to create and display multiple looks of content for theatrical releases and engage moviegoers at ArcLight Cinemas Sherman Oaks like never before. We are very happy to be working with the ArcLight team and look forward to creating more StoryWalls like Sherman Oaks at other ArcLight locations.”

According to the two companies, the StoryWall at ArcLight Cinema Sherman Oaks is the largest digital lobby display in the domestic cinema industry with 96 individual digital canvases that can sync to create amazing large-scale digital still and motion images. At nearly 50-feet wide and approximately 15-feet tall, the StoryWall was created by the team at Cinema Scene Marketing and OutFront Media, using OutFront’s Media’s On Smart Media technology platform. Each of the 96 digital canvases is an ultra-slim (12.7 mm thick) On Smart Liveboard that boasts 188 mega-pixel resolution at a pixel pitch of .55mm. The On Smart platform utilizes wireless connectivity and cloud-based content management services to display and synchronize content across the displays.