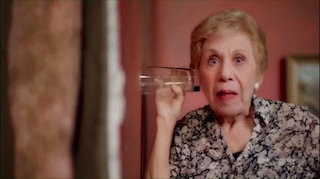 Tips for energy savings are delivered with a theatrical flourish in a new campaign for ComEd directed by Accomplice Media’s Alberto Belli.

Conceived by Leo Burnett, the ads appear under the title of the Single Bulb Theatre and feature Chicago-area actors in light-hearted scenarios acted out on stage sets. In Break Fast, two actors play a couple in the midst of a domestic argument with the woman smashing plates in response to the guy’s lame attempts to cover up his flirtatious actions. A neighbor listening in through a wall, suggests a better way to save energy would be to only run the dishwasher when it’s full.

It was a very cool idea to create awareness of ComEd’s products and services,” says Belli. “They’re unique spots. People will be sharing these on YouTube.”

A second spot, Slumber & Lightning, features members of Chicago’s Red Rose and Shine! children’s choirs in a mini-musical about a spooky sleepover. A third spot, Dill Shakespeare, features the voice of John Byrnes from Chicago’s Shakespeare Theatre in a reenactment of Romeo and Juliet set inside an aging refrigerator with lonely pickles cast in the starring roles. The narrator quips, “Running an old refrigerator always ends in tragedy.”

Belli, who was selected for this year’s Saatchi & Saatchi New Directors Showcase at Cannes, has a knack for coaxing funny and engaging performances from talent. He says that Break Fast had to be handled with a light touch. “It needed to feel like a funny moment between two people, and not something violent,” he says. “It was a matter of finding the right balance and chemistry.”