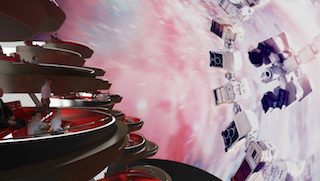 At a time when the COVID-19 pandemic has disrupted movie releases, put an end to red carpet premieres, closed cinemas and forced those that have managed to reopen to block out seats to create social distancing, the Paris based design firm Ōma is proposing something revolutionary. According to an article on the website Globetender, Ōma cinema offers audiences an intimate atmosphere, sitting within pods rather than on the long rows of traditional cinemas.

The architecture is based on three major features, according to the company, “an original platform layout; a flexible seat arrangement in each balcony; and projector positioning among the seating pods allowing audiences to get much closer to the screen and the action.”

Pierre Chican, cinema architect, founder and CEO of Ōma told Globetrender, “Whereas all the cinemas built for more than 50 years now are similar and reproduce the same seating arrangement of the audience, this concept of movie theatre creates a cinematographic experience at the same time intimate, spectacular and immersive, where every seat in the house is the best seat in the house.”

Having the pods means that the slope of the seats can be at a higher incline – between 50 and 60 per cent – rather than a typical slope, which is usually about 25 degrees. Each pod will have about three rows of six seats, reducing the chance that shorter members of the audience are stuck behind someone far taller.

The layout of the cinema also means that front rows are further back, while back rows are elevated – creating a wall of vertical seating, rather than the typical “front to back” row layout.

Ōma says, “The staggered platforms allow the central positioning of the projector, thus the best possible projection of an image free of any distortion. The Ōma cinema is compatible with any type of digital projection and sound system technology on the market. Customizable platform distribution allows the Ōma to meet very specific location needs, whether existing structures or new projects. Operators can choose the size of each platform, number of levels, platforms per level, as well as seating configurations per platform.”

Speaking to The Metro, co-founder Nicholas Chican said, “The inspiration came from the older, Italian theatre with the balconies, and the opera houses. “We wanted to make a link between the older opera houses, with the architecture, and the traditional theatre, within like a futuristic movie theatre. The idea was to bring something different, we wanted to bring the audience closer to the screen.

Ōma is offering the design as a patent to other cinema owners who wish to recreate the experience in their own theatres.