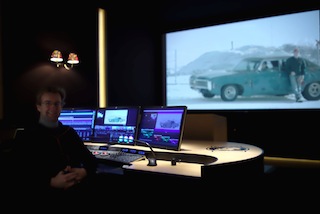 Ömheten has won The Guldbagge Award, Sweden's equivalent of the Oscars, for Best Cinematography. Director of photography Petrus Sjövik accepted the award.

Ömheten was conformed, graded and finished in Mistika by colorist Sebastian Guest for DCP deliverables, at Europa Sound and Vision’s new facility in Stockholm.

Guest said, "I worked on Ömheten with DP Petrus Sjövik last year. The backdrop of the movie is the old northern mining town of Kiruna, part of which had to be relocated due to the now unstable terrain beneath. We followed the day-to-day life experiences of a number of young people living there. Visually, our goal throughout was to maintain a soft look that flattered the characters and nature, contrasting with the difficulties our characters faced, in a part of the country where conditions can be harsh and lives are in many ways defined by the mine and mining. It is very much a picture-driven feature (there is little dialogue). The soft look is particularly important for the moments of tenderness (the literal translation of the movie's title) which punctuate the feature.”