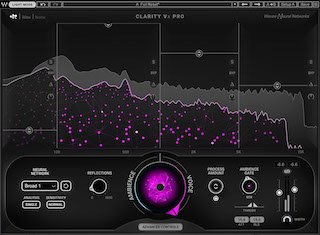 With its Neural Networks engine, Waves Clarity Vx Pro cleans noise with a real-time workflow that requires no rendering or bouncing of tracks, and with no compromise to the integrity of the original voice performance, which remains natural and consistent. Clarity Vx Pro is also intuitive: no longer do users need to wade through a dozen-plus modules to clean dialogue.

Re-recording mixer Ron Bartlett who has worked on films including Dune, King Richard, Blade Runner 2049, and Life of Pi said, “I was pretty shocked when I first tried Clarity – I’ve never heard something this good. You can go very far with the noise reduction, and it still sounds natural without affecting the dialogue. It’s also real-time, so I don’t have to render each track. It’s a huge time-saver that allows me to spend more time being creative in my dialogue mix, rather than being a technician who gets rid of noise.”

Julian Slater, re-recording mixer and sound designer on such films as Baby Driver, Last Night in Soho, Jumanji: Welcome to The Jungle and The Trial of the Chicago 7 said, “When I first tried Clarity Vx Pro, I was simply flabbergasted and stunned. It’s groundbreaking. It can go further than a lot of other plugins when it comes to noise reduction, but still keep the original voice without it sounding watery and over-processed. It’s saving me so much time – it’s literally just taking the main dial and peeling the noise back. Very impressive.”

And Nancy Nugent, title supervising sound editor on films such as The Flash, Barb & Star Go to Vista Del Mar, The Tomorrow War and The Tender Bar said, “Clarity Vx Pro has quickly become an essential part of my toolkit when working with production dialog recordings. It can remove unwanted sounds in ways no other plugin can.”