The Society of Motion Picture and Television Engineers today announced that Shane Murphy has won the $5,000 grand prize in The Vista Project student filmmaker competition and that Jon Navarro was selected as runner-up. Led by cinema-industry pioneer Bud Mayo, chairman of New Vision Theatres, and by Barbara Lange, SMPTE and Hollywood Professional Association executive director, the judging committee named the winners during CinemaCon week, March 27-30 at Caesars Palace in Las Vegas. 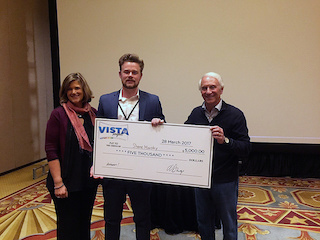 "We're very pleased with our finalists' completed works, which debuted at a special screening attended by members of the exhibition community, media, and guests," said Mayo, who is also founding chair and financial backer of The Vista Project. 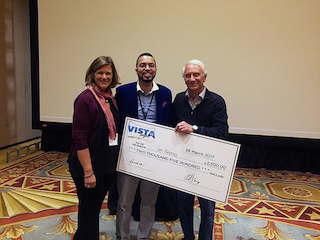 "TimePlay's innovative technology made this unique, interactive next-gen content creation possible, and we are especially grateful to John Race and Andrei Petrov of TimePlay for working closely with our students to help them complete their shorts on an accelerated timeline so they could be presented at CinemaCon. I would also like to congratulate our third-place finisher, Ian Job of Africa Digital Media Institute in Nairobi, Kenya."

TimePlay supplied its proprietary technology platform for the competition, which is designed to serve as an incubator for the next generation of cinema storytellers. Members of the company's executive team mentored students in completing 10-minute short films featuring unique storytelling with multiple branching options that enable the audience to choose the plot direction.