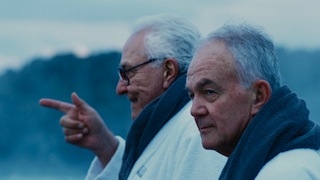 The film is produced by Mynette Louie, Sara Murphy, and Christina Jennings, and executive produced by David Gordon Green, and Julie Parker Benello, Dan Cogan, Geralyn Dreyfous, and Wendy Ettinger of Gamechanger Films. Land Ho! is the first film to be financed by Gamechanger, which launched last fall to exclusively finance features directed and co-directed by women.

Starring Paul Eenhoorn (This is Martin Bonner) and newcomer Earl Lynn Nelson, Land Ho! follows a pair of retirees who set off to Iceland in an attempt to reclaim their youth through Reykjavik nightclubs, trendy spas, and rugged campsites.

“Three days ago we saw the movie with an audience for the first time,” said Katz. “Sharing Mitch and Colin’s story that afternoon was just the beginning of an incredible journey for all of us.”

“We are thrilled to be working with Sony Pictures Classics.  Finding ourselves in the same company as Woody Allen, Michael Haneke, Jim Jarmusch, and countless other iconic directors is an incredible honor,“ Stephens said, adding, “We can’t wait to get this party started.”

The deal was negotiated by Andrew Herwitz, president of Film Sales Company, and Andre Des Rochers of Gray Krauss Stratford Sandler Des Rochers, on behalf of the filmmakers.