The SoHo International Film Festival has announced the films that will appear in this year’s event. The festival returns to New York City June 9-16 at Village East Cinemas. 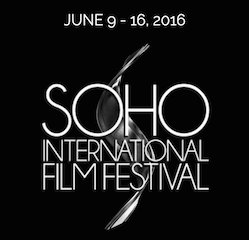 Some of this year’s award-winning documentaries are Happy Lucky Golden Tofu Panda Dragon Good Time Fun Fun Show by SoHo Alumni Carrie Preston (True Blood, Crowded) along with The Dwavernaut by director Josh Bishop; Legends of Freestyle from Steve Stanulis starring Lisa Velez (Kiss of Death, Gladiator) and Translacion: The March to the Altar of Uncertainty from director Will Fredo.

Many of the selected films will hold Q & A sessions with cast and crew members following each screening, along with panels, social events, and other networking opportunities for everyone involved. Leading figures from all disciplines of the film industry including distributors and media will also be in attendance.

“This year, is really exciting… we've received submissions from more countries than ever before, an even larger number of great films from women filmmakers, and a great number of LGBT films that allowed us to make a specific program for it,” said Sibyl Santiago, executive director and head of programming.  “And we continue to be truly blessed with a super strong support from the New York filmmaking community, which we are proud to continue to showcase at SoHo.”