Barbara Lange, executive director of the Society of Motion Picture and Television Engineers, was honored last month by her alma mater, Washington & Jefferson College, with its 2017 Alumni Award for Achievement during its annual President's Homecoming Dinner.

"It's wonderful to see Barbara honored by her alma mater for her outstanding professional achievements," said SMPTE president Matthew Goldman, who is also senior vice president of technology, TV and media at Ericsson. "She has made invaluable contributions to the development and growth of SMPTE, and her leadership of the Society is a powerful example for students and young professionals entering the media and entertainment industry." 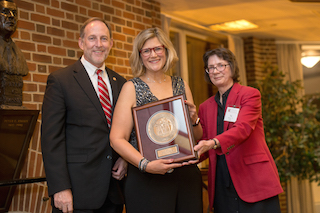 Since 2000, the W&J Alumni Award for Achievement has been presented annually to an alumnus or alumna of W&J who has reached the pinnacle of his or her chosen field and, through this achievement, has brought recognition to the college. In receiving this award, Lange joins a list of W&J alumni who have distinguished themselves in a broad range of fields, including government, law, business, medicine, the arts, and athletics.

The connection of W&J graduates to SMPTE goes back decades, well before Lange first entered the halls of the liberal arts institution. Ken Mason and his son John Mason, who respectively served in the role of SMPTE president from 1975-76 and 2001-02, both are graduates of the college.

"Barbara is an outstanding example of the best that comes of a liberal arts education," said Patricia A. Brletic, Ph.D., chemistry professor at W&J and Lange's college advisor, during the award ceremony. "Though it has been many years since she opened a chemistry book, the scientific method Barbara learned at Washington & Jefferson laid the foundation for her career success."

Lange majored in chemistry and German while earning her bachelor of arts from W&J, which was founded in 1781 in Washington, Pennsylvania. She joined SMPTE in 2010 as executive director and is responsible for executing the SMPTE Board of Governors' strategic vision to increase the Society's visibility and relevance in an ever-changing media ecosystem. The Society focuses on three pillars of activity — standards, membership, and education — and various programs within each.

Highlights of Lange's tenure at SMPTE include growing the global membership; successfully launching the Society's first digital library of its complete intellectual property back to 1916; publishing regular updates on standards activities; overseeing the establishment of new sections in India, the U.K., and the U.S.; forging the partnership with the Hollywood Professional Association (HPA); and creating the Society's Next Century development fund as part of the Society's centennial in 2016. Prior to joining SMPTE, Lange developed a focus on product management as a scholarly publishing executive, often speaking at industry conferences. She spent her early career at the world's largest technical association, IEEE, and at the German scholarly publisher Springer-Verlag.

During her remarks at the ceremony, Lange reflected on how she had come of age at W&J and discussed how her liberal arts education there supported her in developing problem-solving and critical-thinking skills that have been invaluable throughout her professional career. Lange also spoke of her work at SMPTE and the vital role that the Society has played in making it possible to enjoy the highest-quality moving images on today's various platforms.

"At SMPTE I am challenged to increase the diversity within our membership and leadership ranks because when there is a diverse workforce, great things happen," said Lange. "So, I look to academic institutions such as Washington & Jefferson to fill the pipeline with talented, creative, innovative, thoughtful women — and men — who can help me achieve this goal."