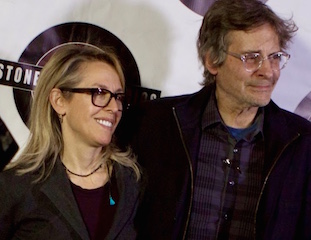 In a modern day twist on It's A Wonderful Life, George Benson, played by Christopher Lloyd (Back to the Future, Who Framed Roger Rabbit) is haunted by tragedy, the loss of Violet, the wayward girl who he had a soft heart for, due to an accident he may have been able to prevent. Humoring what he thinks is the youthful imagination of his grandson, George stumbles into an invisible portal hiding in his closet. Falling ‘to the other side’ into his younger body, he is able to face his conflicts and troubles with new light along with a temptation to try to change the past or possibly re-envision it.

“Chris is an ageless actor, he’s in great shape, and was able to parry, elevate and improv with our young 10 year old star, newcomer Rishon Salters,” said Alyssa Rallo Bennett. “He is refreshingly not vain, appearing older in the film than he does in life, and in spite of his plethora of experience was always open and game to pushing limits when working with me as a director. I’m so grateful for what he and the spectacular ensemble cast gave me to work with on this timely poetic homage to a classic film.”

Lloyd, will be in attendance after completing a matinee in the new play Pound Off-Broadway at the Lion Theater that day. The Bennetts, cast and crew will join Lloyd at the premiere as well.

“ReRun illustrates the faultiness of memory and how even the gravest of old mistakes aren't as daunting in retrospect,” said Avery Davenport of the Woodstock Film Festival.