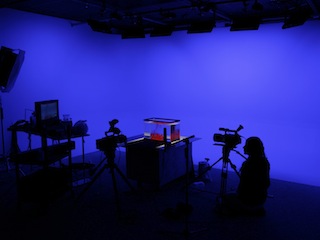 Lincoln, Nebraska’s Outpost12 Studios is using new Zylight Z90 compact LED lights on location and IS3c large panel LED lights in its studio. Known in their market for VFX and animation work, the studio is using its new lighting instruments to produce custom interactive work for the Web that creates unique branding experiences for its clients.

According to Mike Domgard, president and CEO of Outpost12, the company purchased its four Z90s in January and seven IS3cs in April. Originally, two of the new IS3c lights were going to be used for location shoots, but Domgard wound up replacing all the older fluorescent light fixtures across his studio’s lighting grid with Zylights.

“I wanted to be able to light my cyc and go from daylight to tungsten and other variations easily and quickly,” Domgard said. “No other light has that flexibility. And they look way better than our old lights, so much more professional.”

On location, the Z90s are paired with a Sony F55 4K digital motion picture camera. Domgard uses the daylight and tungsten settings on the light, but also mixes colors on location to mimic moonlight or sunlight – or just add an extra splash of color in the background. “The Z90 is the most versatile light there is,” he added. “Plus, they’re super-small, so it’s easy to store them in the kit.”

Using each light’s built-in ZyLink wireless technology, Outpost12 uses a Zylink Remote to wirelessly control all the IS3cs on its lighting grid. As a result, Domgard said the studio does not even use a lighting board. Each instrument can be adjusted individually, or groups of lights (or even the entire grid) can be changed simultaneously. The technology not only creates uniformity in color for all the instruments, but it saves significant setup time.

On a recent project, for example, the cyc was lit for chromakey green, but the talent arrived wearing a green shirt. Using the Remote, Domgard was able to change the color wash to a pre-programmed chromakey blue in an instant. “It was just nice to be able to do it that quickly,” he recalled. “ZyLink allowed me to change colors super-fast, and I didn’t have to get on a ladder. It’s more than adequate for our needs.”