New York Women in Film and Television has partnered with iWomanTV to showcase the work of the association’s talented members through its fifth annual online film festival. Members are invited to submit their short films, TV pilots and webisodes. 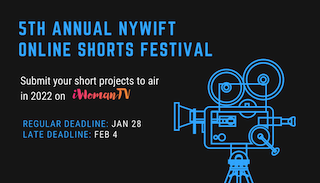 Trigg-Jones has leveraged her 25-years of experience in front of the camera and behind the scenes to empower women everywhere by launching iWoman TV — the first streaming platform exclusively dedicated to showcasing content created by women, about women, for everyone.

Projects must be under 40 minutes long.

Projects that were completed prior to 2016 will not be accepted.

Projects must feature a current NYWIFT member in a key creative role. The NYWIFT member must be the person to submit the film to the festival.

Filmmakers who are not current members can join here [email protected]

All participants must allow iWomanTV to host member’s content for one-year on a non-exclusive basis. Members must also follow iWomanTV on social media as well as promote their film airing on iWomanTV.

Submissions must be received by 11 p.m. EST January 28. A fee of $25 will be charged for any films submitted after that date but prior to 11 p.m. EST on February 4. No projects will be accepted after February 4.

The festival will run on iWomanTV from March 1-31. Winners will be announced on April 8.