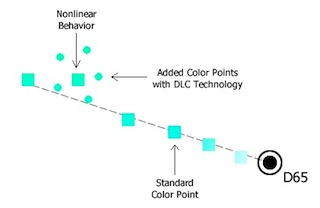 “When profiling a monitor took four hours,” said SpectraCal’s founder and CTO Derek Smith, “many production and post-production companies would tell us they just couldn’t afford to have the monitor out of use that long.”

Smith said the new technology allows monitors to be accurately profiled in less than an hour.

Correcting a monitor with a 3D LUT allows much more precise conformance to standards than relying on just the monitor’s built-in controls, but the complexity and cost of the process long put 3D LUT correction out of reach for most users. That is rapidly changing.

Previous generations of profiling tools required users to make elaborate hand optimizations of the pattern set and the LUT. User communities would band together and experiment for weeks and months to figure out the best set of patches for a given monitor.

“We owe those pioneers a debt of gratitude,” said Joel Barsotti, SpectraCal’s director of software development and principal developer of Dynamic Linearity Correction. “But hand-optimization method was never going to allow mainstream adoption.”

CalMAN’s DLC turns the job previously undertaken by the bands of cooperating volunteers over to software. Live in real-time, the software automatically determines unique nonlinearities in the display’s performance and inserts more calibration points in those areas of nonlinear behavior.

SpectraCal has recently released a white paper detailing the theory and methodology behind Dynamic Linearity Correction. The white paper, Display Profiling Solutions, is available at http://studio.spectracal.com/display-profiling-solutions.

CalMAN Studio 5.3.5, the first version to include DLC technology, is currently in beta. The release candidate will be available for download soon at http://studio.spectracal.com/downloads.