Mangurama, Bobb Films to Release Weed the People in U.S. and Canada

Mangurama and Bobb Films have acquired the U.S. and Canadian theatrical distribution rights for director Abby Epstein (Until The Violence Stops, The Business of Being Born) and executive producer Ricki Lake’s (The Business of Being Born, Breastmilk, The Mama Sherpas) Weed the People. The film premiered at the 2018 SXSW Festival, was the Audience Award Winner at The Nashville Film Festival and will have a West Coast premiere at the Mill Valley Film Festival. 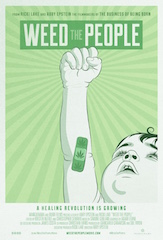 Epstein and Lake said, “We are thrilled to be working with Mangurama on the theatrical release of our documentary, Weed The People. Following in the footsteps of The Business of Being Born, which changed the way Americans looked at childbirth, we hope that Weed The People will humanize the controversy around medical cannabis.  As our film reveals, access to this plant has become a human right issue.”

Cannabis has been off-limits to doctors and researchers in the US for the past 80 years, but recently scientists have discovered its anti-cancer properties. Armed with only these laboratory studies, desperate parents obtain cannabis oil from underground sources to save their children from childhood cancers. Weed The People follows these families through uncharted waters as they take their children’s survival into their own hands. Some of their miraculous outcomes provoke the unsettling question at the heart of the film: If weed is truly saving lives, why doesn’t the government want people to access it?

In a statement, Abramorama CEO Richard Abramowitz and COO Karol Martesko-Fenster said, “We are thrilled to be entrusted to engineer the North American release of Weed The People on the eve of our midterm elections. Abby, Ricki, and the filmmaking team have captured the heartbreak of pediatric oncology and crafted a timely insiders perspective challenging our notions of what defines a drug versus a medicine.“