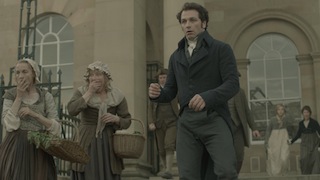 LipSync Post provided grading, online editing, sound, VFX and titles for BBC One’s three-part drama Death Comes To Pemberley, based on P.D. James’ acclaimed sequel to the Jane Austen classic Pride and Prejudice. The dramas, produced by Origin Pictures for BBC One, are scheduled for broadcast on December 26-28.

The beautifully shot photography had to rely on a lot of natural light due to rigging restrictions in period locations and stately homes; selective grading by senior colorist Stuart Fyvie helped to enhance or shade parts of the image that would ordinarily have been lit on set. The drama also features flashbacks of a previous incident, remembered from several characters’ points of view; Stuart added subtle nuances such as glows, highlights and desaturations that would help the audience know where they were in the story.

For the sound mix, re-recording mixer Rob Hughes worked hard to bring a feeling of a working home to Pemberley, with details such as distantly heard servants and passing conversations. A lot of the Foley tracks were recorded on location, augmented by recordings shot in a 15th century music shop in Surrey that had just the right amount of creak to the floor. The flashback narrative elements were a very strong part of the story, and the sound mix sought to complement Stuart’s grade with a very ethereal treatment.

The VFX work also needed to maintain the reality of a period production. Key shots included the compositing of a period cottage into an ideal riverside location, complete with chimney and smoke; and bringing exterior shots of Pemberley to life by adding the glow from a single light source shining through windows at various angles.

LipSync has previously worked with Origin Pictures on productions including The Crimson Petal and the White, The Awakening, Hidden and The First Grader.

David Thompson, producer, Origin Pictures said, “It is always a pleasure to work with the LipSync team. We know the work will be completed on time and within our budget, and the creative talent in all departments is outstanding.”