Killer Tracks is expanding and broadening the scope of its groundbreaking Artist Series with a focus on emerging talent. The company is releasing a number of new tracks from breakout artists, including work from Portland alt rockers Rare Monk and the L.A.-based quartet Misun.

The new music can be purchased through iTunes and is also available for licensing and sync. Additionally, Killer Tracks will feature the artists on its YouTube channel and provide marketing support and promotional services. While the focus of the Artist Series is on licensing, the program also aims to boost career development and to raise the profiles of its featured artists among consumers.

“Our Artist Series is unique in the licensing industry,” says Killer Tracks vice president, head of music licensing Anna Maria Hall. “These are real up-and-coming bands that are touring and playing club dates. It’s another way that we are extending our brand promise for having great, cutting edge music.”

Killer Tracks launched its Artist Series in 2012 as a way to foster licensing deals for bands and other working artists. Since then, it has had notable successes with a number of established artists including Rev Theory and Alex Band. Now it’s placing greater emphasis on recording artists before they are on the charts. The company is working with indie label B3SCI Records and music blog BlahBlahBlahScience to identify new talent that have breakout potential and fit the licensing market. 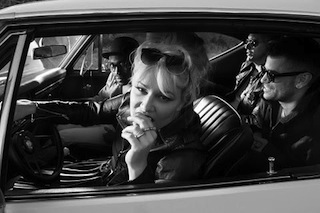 “We’re helping to develop bands by fronting recordings and getting the word out,” says vice president of music production Carl Peel. “At the same time, we are offering our clients access to music and artists that are gaining traction in the world.”

Rare Monk and Misun fit the definition of bands on the rise. The former, which has a budding reputation as a live act both in the U.S. and in the U.K., are purveyors of experimental rock with a psychedelic flavor, tight rhythms and layers of strings. The band describes it as “atmospheric space rock.”

“These bands are gaining a lot of traction,” says Killer Tracks, Marketing and Creative Manager Kristin Blanford. “They are the verge of breaking out and we want to be part of that success.” Killer Tracks plans to debut Misun’s latest music video, Travel with Me, on its YouTube channel this week.

Hall says that Killer Tracks’ licensing agreements with the bands are not restricted to original music. “These bands have done great covers,” she says, pointing to Rare Monk’s new version of the Bill Withers classic Ain’t No Sunshine. “A lot of movies, shows and trailers are using covers where artists offer a different take on familiar songs. We have the ability to assist with that type of licensing as well.”

The bands appreciate the extra attention. “We’re excited to work with a company that is an industry leader,” says Rare Monk bassist Forest Gallien. “It’s a great way to get our tracks played and gain more exposure to film and television.”

Killer Tracks plans to release more music from these and other artists throughout the year. “We’re very selective with whom we work, but we are always looking for new talent,” says Hall. “People in the production community depend on us for that. They come to us when they are looking for cool stuff.”