The National Association of Theatre Owners will honor John D. Loeks, chairman of Studio C, with the 2019 NATO Marquee Award during this year’s CinemaCon, according to the conference’s managing director Mitch Neuhauser. CinemaCon, the official convention of NATO, will be held April 1-4, 2019 at Caesars Palace in Las Vegas. 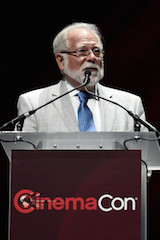 Loeks is being recognized for his unequalled dedication, commitment and service to the motion picture theater industry. He will receive his industry tribute as part of CinemaCon's State of the Industry: Past, Present and Future presentation on Tuesday morning, April 2.

“John Loeks’ role in the exhibition industry defines leadership. This humble gentleman from Michigan had the vision to create the Global Cinema Federation and unite exhibitors around the world, while never forgetting the role of the independent theater operators,” said John Fithian, President and CEO of NATO. “All of us at NATO could not be more grateful for this wonderful man’s leadership.”

After initially practicing law for 20 years, John Loeks joined the family business, Loeks Theatres, in 1990. In 1997, he founded Celebration Cinema, building six megaplexes and purchasing two more. Loeks Theatres currently has 11 theaters operating in Michigan, and their 12th megaplex is set to open in the heart of downtown Grand Rapids, Michigan. The building will serve as a mixed-use complex of retail, housing, and parking, with a music venue, office space and a nine-screen theater. Loeks has been a member of the board of the National Association of Theatre Owners since 1992. In that time, he has served in many different capacities including NATO Chairman from 2015-2017.

In addition to his work in the cinema, Loeks has served as owner and president of ShowSpan, Inc., a company that produces 13 major annual consumer shows in Michigan and Wisconsin. He is the founder and former chairman of AuSable Institute of Environmental Studies, which provides a wide variety of environmental science courses to students from nearly 60 participating colleges. In 2009, he founded Schools for Sierra Leone, a foundation that builds and supports schools in Sierra Leone, West Africa.