Continuing to broaden support for its film and television clients, Goldcrest Post has hired Wade Rudolph as head of production. Rudolph arrives from a similar position at Deluxe Creative Services, New York, and brings 15 years of production and post-production experience, spanning episodic and long-form television, independent features and documentaries. At Goldcrest, he will oversee picture finishing and work with clients and the facility’s colorist and editors to ensure projects hit their creative and delivery targets. 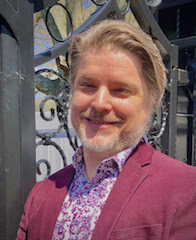 “I’ve known Wade for more than a decade and watched as he’s developed into one of the best in-house producers in the industry,” said Goldcrest Post managing director Domenic Rom. “He is smart, understands current workflows and knows how to help clients manage projects efficiently and take advantage of the latest technical resources. We’re excited to have him join Goldcrest as we continue to build our world-class team.”

Rudolph plans to use his diverse experience to assist clients in planning for post and meeting today’s complex delivery requirements. “I’ve seen how post has evolved over the past decade and know what works and what doesn’t, how clients can be more efficient and get better results,” he explained. “I want to help Goldcrest further its reputation for outstanding customer service and status as a provider of premium post services.”

Rudolph spent six years at Deluxe as head of production and senior producer. His background also includes senior producer roles with Technicolor PostWorks and Post Factory. He began his career with MTV Networks. His recent credits include the HBO series High Maintenance, the Amazon Prime feature Sea Oak and the HBO feature The Night Of.

Rudolph said that he was attracted to Goldcrest by the opportunity to work with Rom, whom he previously served under at Technicolor PostWorks. “Dom gave me my first job in post-production,” he said. “I admire the way he treats his staff, his values and his commitment to his clients. I’m thrilled to work with him again.”