Documentary Joachim Prinz: I Shall Not Be Silent Posted at Aciem Studios 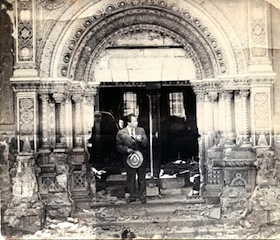 , which had its US premiere at the New Jersey Performing Arts Center earlier this month as part of a special event produced by the New Jersey Jewish Film Festival.

Produced and directed by Maplewood-based filmmakers Rachel Eskin Fisher and Rachel Nierenberg Pasternak, Joachim Prinz: I Shall Not be Silent is the initial film from their production company R Squared Productions, which was founded to capture stories from the past with cultural and social relevance for today’s audiences. The film tells the life story of Rabbi Prinz, who helped organize the March on Washington, in August 1963, and who spoke just prior to Dr. Martin Luther King, Jr., when he delivered his stirring I Have a Dream’ speech. It is the first film to comprehensively chronicle and examine the life and mission of the famed rabbi and civil rights activist.

“The local filmmaking community is growing ever-stronger, and R Squared Productions has created a film that is as much about the strength of the New Jersey civil rights movement, and the Newark community that provided its core, as it is about the voice of a great American, Rabbi Prinz,” said Brodeur. “Aciem Studios supports the New Jersey film community, which is expanding through venues such as the Montclair Film Festival, and we have deliberately structured our facility and staff to support independent directors and producers by providing comprehensive production services – all under one roof.”