At CineEurope 2017 in Barcelona June 19-22, Christie will preview what the company says is the first direct coupled Pure RGB laser-illuminated cinema projector not to need external cooling systems. Christie’s new CP4325-RGB is an addition to its Freedom Series of Pure RGB laser cinema projectors. 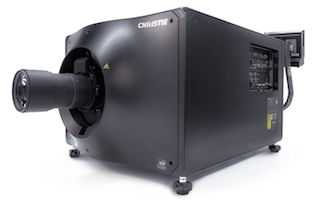 Brian Claypool, vice president, product management global cinema said, “Everyone, understandably, wants to enjoy the benefit of RGB laser illumination, with its greatly increased brightness thresholds, enhanced contrast, the chance to explore wider color gamut and the elimination of consumables with the goal of reducing cost of ownership. Christie remains dedicated to ensuring that the solutions in our product and solutions pipeline create tangible value for both exhibitors and the increasingly sophisticated audiences from whom they establish their core business. The CP4325-RGB is the first affordable Pure RGB laser projection system that allows exhibitors to significantly improve the quality of the experience while fostering sound economics that allow the business to thrive.”

Manufacturers have alternated between direct-coupled and fibre-coupled designs to date, but all feature external or remote cooling systems. These economics may be acceptable for premium large format screens, but most mainstream exhibitors are looking for a straight swap from lamp to laser when investing in their next generation cinema projector. The CP4325 is a compact projector and the first all-in-one Pure RGB laser system on the market that significantly improves image quality while preserving cost.

The Christie CP4325, while still shown as a product preview at CineEurope, is developing quickly. Like Christie’s fibre-coupled projector, the CP4325’s direct-coupled all-in-one enclosure system will offer 30,000 hours of operation to 80 percent brightness, provide contrast rations exceeding 5000:1 and provide more uniformity and wider color gamut than other laser derived systems.

Adil Zerouali, Christie senior sales director EMEA said, “This is a great opportunity for exhibitors who want the benefits of a Pure RGB laser system, but until now could only afford cheaper solutions which convert blue-laser light into the cinema color space. Cinema must maintain the highest standards of image and color fidelity. With the CP4325-RGB, the time has arrived where Pure RGB is now available for all.”