The Tribeca Film Festival has selected the Latin American documentary Primera to participate in the 20th anniversary of the international film festival. This year's festival, to be held June 9-20 offers a hybrid of in-person events and Tribeca at Home, the festival’s exclusive online premiere screenings and virtual events. Primera, which will premiere at the festival, was selected among foreign films and documentaries due to its vibrant Latin American production quality, story, and vision. 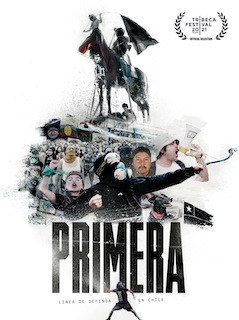 Primera is directed by Vee Bravo, a Chilean who was exiled from his home country in 1981, at the young age of seven. Bravo moved to New York City where he quickly became part of the Chilean community in Far Rockaway, Queens. Always connected to his Chileno roots, Bravo woke up one morning in 2019, turned on his phone, and saw that Chile had made the New York Times. There was a story about high school students jumping the turnstiles in the local subway systems as a form of protesting an increased train fare. The Chilean government quickly unleashed the military on student demonstrators resulting in brutal incidents. Bravo felt that the government’s response was eerily reminiscent of the deadly tactics used by General Pinochet during the dictatorship period of the 70s and 80s.

“In the ’70s and ’80s, we didn’t have the power of the internet to share what was actually happening in Chile. Now, we do. I knew I had to do my part in bringing this story to the world stage,” Bravo said.

So, in October of 2019, a few days after reading this news from his Brooklyn apartment, Bravo jumped on a plane and headed to Chile. Bravo’s initial goal was to simply document the reports of human rights abuses, protests, and the political atmosphere of Chile. Little did he know, this documentation would lead to the creation of a full-length documentary film, Primera.

Within two weeks of Bravo’s arrival in Chile, a recorded ten million Chileans had taken to the streets demanding a new constitution. Primera tells the story of four parents-turned activists who are leading Chile’s revolutionary path to a new constitution. Bravo developed relationships with Anji, Camila, Felipe, and Male, who spent their days as pastry chefs, street musicians, welders, and attorneys. These four everyday citizens became front-line movement leaders after witnessing violent actions from the Chilean military towards the protestors. The very next day they each assembled their neighbors and hit the streets to stand in solidarity with demonstrators in the service of a new Chile.

Primera tells the painful, raw, brave, vivid, and hopeful story of how the courage and resilience of these main characters, who serve as a representation for the millions of people involved, ultimately led to a country’s story of success and victory. In a country-wide vote, the voices of almost 80 percent of Chile screamed for a new constitution. Their voices were heard, and Chile is currently in the process of voting to see who authors the new constitution. Primera serves as a blueprint for a new democracy, highlighting themes of women-led movements, social and structural change, and mutual aid.

“I made this film to honor the legacy and story of the main characters,” said Bravo. “I learned nothing about Latin culture in high school. Nothing. We have been made to be invisible in this country, and I wanted to make sure we are in the history books for the next generations. That’s why I told the story, with the help of a team that was almost entirely Chilean. So the generations to come can see the everyday people that fought victoriously for a new constitution and a new democracy. I see myself as an agent of history that had to make a choice. Doing this film was the choice, and I gave it everything. But I didn’t do it for me. I did it for them.”