Africa Cinematography Festival to be held in November

Legacy Empire Management has announced that the first Africa Cinematography Festival will take place in Lagos, Nigeria in the second week of November. “The ACF will provide a platform for film equipment manufacturers to reach the desired market with their latest offerings and technologies.” Said Legacy Empire’s CEO Henry Emenike. “Quality filmmaking is tied directly to good technologies; sadly, there is a huge gap in this aspect among film makers.” 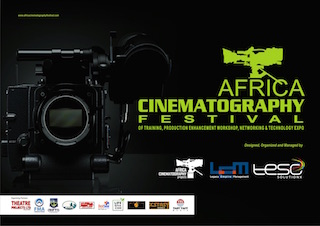 According to Emenike, the organization is hopeful of bridging this gap by creating a meeting point for both the manufacturers of these equipment and filmmakers.

“This is a sure way to address the widespread hunger and desire for the next level in the industry. The Africa Cinematography Festival offers industry players the platform to transform the local film space into international standard,” said Emenike.