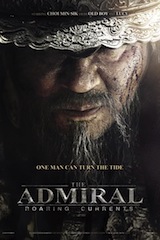 The Admiral: Roaring Currents, will make its U.S. debut in major market cinemas on August 15. The film follows the events of a legendary Korean naval battle, Myeong-Nyang, and the Korean Admiral Yi Sun-shin (Choi Min-Sik) who leads only 12 battleships to victory against 330 Japanese ones.

A large-scale production set with eight life-size ships made with authentic materials used in the actual battle was used in the filming of The Admiral. Through deep research director Lee Han-Min strived to recreate the amazing events that took place in 1597.

Choi Min-Sik, most known for his lead role in the cult hit Oldboy” has made a name for himself within the international film community to be able to reinvent himself with every role.  Now in“The Admiral: Roaring Currents, Choi finds himself as yet another intriguing character – a disgraced leader of a small naval fleet, up against all odds.

The Admiral: Roaring Currents is presented and distributed by CJ Entertainment and produced by Big Stone Pictures. The film will premiere in major market theaters across the country.  Check your local listings or visit www.cj-entertainment.com for more details.