Abramorama has acquired U.S. distribution rights for Jesse Dylan’s feature length documentary film Soros, from Vital Pictures. Abramorama is orchestrating a nationwide live streaming premiere with a post-screening conversation with Dylan and additional guests on November 18 on the film’s website – www.sorosfilm.com. Abramorama will release the film as a nationwide Watch Now @ Home offering starting November 20. The film had its U.S. premiere at the Telluride Film Festival. 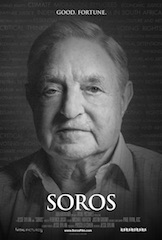 Dylan said, “Working on the film on George Soros, I saw up-close the man who has been decades ahead of his time on so many issues. I got to understand why he is attacked by authoritarian regimes around the world, because he stands for everything they fear.”

Abramorama CEO Richard Abramowitz said, “This film is essential viewing, now more than ever. It stands as a corrective to those who would demonize a man whose unparalleled generosity has been such a force for good in the world.”

Award winning filmmaker Dylan is best known for his narrative feature films including Kicking & Screaming, American Wedding, Crips and Bloods: Made in America (producer), and his video shorts with everyone from will.i.am to John Legend, America Ferrera, and Lenny Kravitz. Dylan directed and executive produced Soros. The film is produced by Priscilla Cohen (will.i.am: Yes We Can).

Billionaire activist George Soros is one of the most influential and controversial figures of our time. Famous for betting against the Bank of England in 1992 and making a billion dollars in one day, he is maligned by ideologues on both the left and the right for daring to tackle the world’s problems and putting his money behind his fight – from free elections and freedom of the press to civil rights for minorities. With unprecedented access to the man and his inner circle, Dylan follows Soros across the globe and pulls back the curtain on his personal history, private wealth, and public activism. Soros reveals a complicated genius whose experience as a Jew during the Holocaust gave rise to a lifelong crusade against authoritarianism and hate.