Abramorama and Giant Pictures announced today that the punk music documentary, Turn it Around: The Story of East Bay Punk is being released in more than 70 territories including the United States, Canada, United Kingdom, Brazil and Latin America. The film can now be purchased only on iTunes.

Abramorama originally released the film in theaters during the Fall of 2017, and it has played to enthusiastic audiences in more than 125 markets across the U.S. 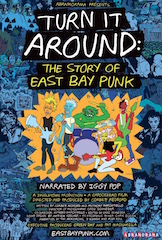 Executive produced by Green Day, the film spans more than 30 years of the California Bay Area’s punk music history with a central focus on the emergence of Berkeley's inspiring 924 Gilman Street music collective. Narrated by Iggy Pop, and from first time feature director Corbett Redford, the documentary is the definitive telling of this vibrant story, drawing from a wide variety of voices and viewpoints and featuring the music of many of the most famous and infamous punk bands ever. The film features interviews with legendary punk and rock bands like Operation Ivy, Minor Threat, Dead Kennedys, Bad Religion, Metallica, Rancid, AFI and more.

Abramorama chief operating officer Karol Martesko-Fenster said, “Our dedication to music driven films couldn’t be stronger and we are pleased to solidify our collaboration with Giant Pictures with the digital release of Turn It Around: The Story of East Bay Punk to guarantee the reach of this film far and wide.”

Nick Savva, director of content distribution for Giant Pictures added, “As a digital distribution company committed to empowering filmmakers with the tools and expertise needed for a successful digital release, Giant is thrilled to partner with Abramorama and the entire team behind Turn It Around: The Story of East Bay Punk.”