Abramorama is managing the theatrical release of Straight Into A Storm, the music driven documentary about the band Deer Tick. The film will premiere June 15 in New York at the Roxy Cinema Tribeca. 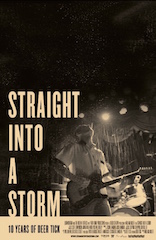 Abramorama will implement a release strategy that has the film hitting cities Deer Tick will play on their upcoming tour in addition to other key markets. The June 15 opening in New York City is timed for the same day as the band’s afternoon show in the city.

The film will also have a special screening in New York City on June 19 for music industry executives as part of the A2IM conference. This is a unique collaboration between Deer Tick, Abramorama, the filmmakers, the band’s management company Mick Management and Deer Tick’s record label Partisan Records.

“Our 10-year anniversary shows were a celebration for our fans and for us,” said a spokesman for the band. “It was a lot of work, but also a blast! William Miller was there every night to capture that spirit. We’re proud and excited for his film to get an official release and proper distribution by partnering with Abramorama.”

“Both the band and the movie fit perfectly with so many of the music films we’ve handled: great music and a great story well told,” said Evan Saxon, head of West Coast acquisitions and business development at Abramorama. “Those few who don’t yet know them are in for a real treat. Simply put, these guys rock.”

Straight Into A Storm centers around Deer Tick's 2014/15 10th anniversary run in New York City. Anchored by a fan-chosen set list and New Year's Eve performance, the film weaves in and out of time over the last 10 years using never-before-seen archive footage from their early days to the successful touring/recording band they are now.