Abramorama today announced Abramorama Selects, a new imprint to handle global digital distribution and marketing for non-fiction feature films and television series. As a part of the newly expanded services offered by Abramorama, the company has entered into a multi-year agreement with Giant Pictures to be their preferred partner. The first film to be released under Abramorama Selects is the feature length documentary Herb Alpert Is… about the legendary musician and music industry titan. 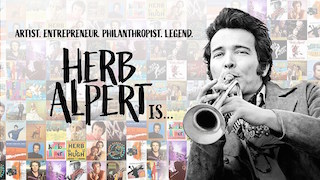 Today, Abramorama is hosting the world premiere of the documentary with a live global screening event on Twitter, YouTube and Facebook followed by a Q&A with Herb Alpert and director John Scheinfeld, moderated by the Grammy Museum’s Artistic Director Scott Goldman. On October 2nd the film will be available via a nationwide Watch Now @ Home cinema release and on video-on-demand through Prime Video in the US, UK and Germany and on Apple TV in Germany, France, Latin America and Japan in subtitled versions and the English language version will be available in the United States, United Kingdom and 52 additional countries.

Abramorama COO Karol Martesko-Fenster and strategic advisor Joe Cantwell said, “Giant Pictures is the natural partner for Abramorama because of its rock-solid technical foundation, deep experience distributing genre content, and its global reach. These strengths have become even more valuable to our company as digital delivery and marketing become the predominant method of reaching audiences around the world.”

Abramorama and Giant have worked together since 2017 to deliver various titles to on-demand services but this new collaboration covers more than a dozen initial Abramorama Selects features and episodic series which will be released to theaters, networks, video-on-demand and streaming services, and transportation providers starting in Q4 of 2020 and continuing through 2021. As a trusted steward of intellectual property for rights owners, Abramorama, will have full access to Giant’s marketing services, and enterprise-level support around encoding, quality control, subtitling, storage, and delivery. Cantwell and Martesko-Fenster negotiated on behalf of Abramorama. Giant was represented by the company’s general manager Nick Savva and Jeff Stabenau.

Savva said, Giant and Abramorama share a passion both for high quality documentary and non-fiction content as well as innovation in distribution models. We are thrilled to partner on the Abramorama Selects imprint to provide seamless access to OTT and streaming platforms worldwide.”