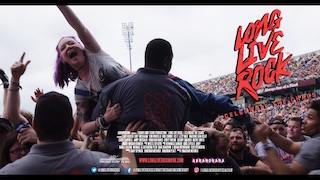 The film is produced by McHugh, Gary Spivack and Jonathan Platt and had its global premiere screening in Europe at the Tartuff /Black Nights Film Festival and its domestic premiere screening at The Grammy Museum in Los Angeles in February followed by a Q&A with some of the talent from the film.

Long Live Rock…Celebrate the Chaos will be launched with an online global red carpet premiere screening event on March 11 featuring a Q&A with the filmmakers, band members and some surprise guests. The following day Long Live Rock will be available to music fans around the world on Abramorama’s global direct-to-consumer and affiliate partner platform Watch Now @ Home.

Over the last few years Long Live Rock was filmed at various rock festivals around America showing the scope of just how massive these crowds are, rivaling some of the biggest destination music festivals such as Coachella and  Lollapalooza. In intimate interviews, the leading titans of rock discuss the genre and the special relationship they have with their audience. Featuring members of Metallica, Guns N ‘Roses, Slipknot, Korn, Rob Zombie, Five Finger Death Punch, Rage Against the Machine, Greta Van Fleet, Halestorm, Machine Gun Kelley, Shinedown, and many more.

McHugh said, “Gary Spivack and I wanted to make a film celebrating the chaos of rock culture. Growing up in New York City I would do whatever it took to get in to see bands like Zeppelin, Black Sabbath and other rock icons. We were lucky enough to work with great rock stars like Motley Crue and the legendary Metallica when we met at Elektra Records in the 90’s. Now 25 years later we are so proud to partner with Abramorama to shine a light on the most passionate fans in the world and the music that drives them.  Since we have not been able to attend concerts and may not for a while, we hope our film can fill this void until the day we can all rock out together again.”

Abramorama’s CEO Richard Abramowitz said, “Given his decades long career in a world where music and movies meet, Jonathan is the ideal person to tell this story. We’re delighted to shepherd his first effort as a director out into the world.”

Evan Saxon, Abramorama’s head of music added, “We’re ecstatic to bring Long Live Rock…Celebrate the Chaos to music fans around the world. I’ve known Jonathan McHugh, Gary Spivack and Jonathan Platt for many years, and they know how powerful the relationship between artist and audience is.  Long Live Rock takes fans from the front row to backstage. While there’s no replacing the live concert experience Long Live Rock is the next best thing.”