Following a successful debut last year, Christie RealLaser is once again the projection technology for the 63rd BFI London Film Festival in partnership with American Express.  Christie’s laser projection will also be used for the return of the much-loved 820-seat pop-up Embankment Garden Cinema. 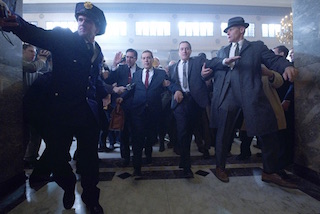 Described by BFI head of technical services, Dominic Simmons as, “One of the highest quality temporary cinemas ever seen,” this year the EGC hosts its first international premiere with Martin Scorsese’s highly anticipated The Irishman from Netflix.

“It’s loved not just by the public and BFI staff, but filmmakers who are often really surprised at the quality. One said it was the best screening of his film he had seen.” Simmons continued. “This a really high-spec install which is what we wanted. It’s as good as a permanent cinema, especially using Christie RealLaser projection with such bright colors, higher color gamut and contrast.”

Christie has worked with the BFI on the projection set-up since the BFI first made the move to build a full, state-of-the-art temporary cinema, providing the festival with a central London venue nestled in the tranquil Embankment Gardens just by the river. “The EGC has become an absolute favorite,” Simmons said, “and has gained a surprising level of affection in just four years. Many people say it is their favorite venue and a shame it’s only available two weeks a year.”

As Britain’s leading cinema event and one of the world’s most important film festivals, the event program runs October 2-13 and offers UK audiences the chance to see some of the most anticipated new films from around the globe, including 28 world premieres, 12 international premieres and 28 European premieres.

The festival is due to close with the international premiere of The Irishman.  Scorsese and several cast members are expected to attend.