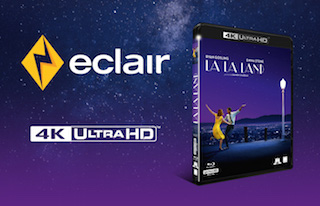 "We are very proud to be the first in France to offer UHD 4K Blu-ray authoring services," said Serge Sépulcre, Éclair’s vice president of digital distribution. "The stakes were very high with the advent of the first UHD 4K Blu-ray disc made in France given the film’s box office success, significant consumer demand and a very quick turnaround of just two weeks of production. Thanks to the confidence shown by the M6 Vidéo/SND team, we continue to build on our expertise and status as a European pioneer in the management of UHD 4K content."

"We are thrilled with this collaboration with Éclair on our first Blu-ray UHD release. The La La Land 4K Blu-ray is a veritable technical tour-de-force that will delight fans," added Tristan Frontier, SND’s technical director.