Webinar Reflects on the Closing of DuArt 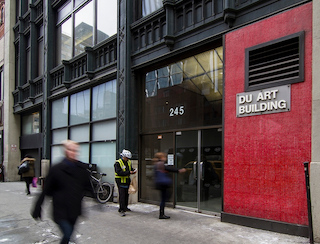 In the next edition of Post Break, the free webinar series from the Post New York Alliance, a group of industry leaders will reflect on the recently announced closure of DuArt after nearly 100 years of continuous service. Panelists David Leitner, Jane Tolmachyov, Tim Spitzer, and Bob Mastronardi will join moderator Domenic Rom to reminisce about their years with the trailblazing company and celebrate its pivotal role in shaping New York’s post-production industry. The free event is scheduled for Thursday, December 16 at 4:00 p.m. EST.

Founded in 1922, DuArt was one of the oldest film laboratories in the world. Although it stopped processing film a few years ago, it helped to nurture virtually every innovation in lab, video, and digital technology from the Silent Era through to the present day. Its chairman, Irwin Young, has been a champion of independent film and served as producer of such critically acclaimed films as Nothing But a Man, Alambrista!, The Maze, American Me and Caught.

Leitner is an Oscar-nominated producer, director, and Emmy-nominated cinematographer with more than 90 film, television and documentary credits, including eight Sundance premieres. He was on staff at DuArt from 1977 to 1985, serving as Director of Optical Printing and Director of New Technology, and responsible for innovations in liquid gate design, cine lens testing, film-to-tape transfer and Super 16.

Tolmachyov was born in Russia and studied at the Moscow Institute of Cinematography. After immigrating to the United States, she worked as a freelance assistant film editor in New York. Joining DuArt, she became a colorist and went onto work on scores of features and documentaries, including work for directors Frederick Wiseman, Ken and Rick Burns and Michael Moore and cinematographers Nestor Almendros, Fred Elms and Ed Lachman.

Spitzer is post-production supervisor at Jigsaw Productions. He spent 18 years at DuArt as manager of optical printing and in other technical and sales roles. His background also includes leadership post with Tape House and Goldcrest Post.

Mastronardi began his career as a customer service supervisor with DuArt in 1980. He later spent 25 years in the Motion Picture Division of Eastman Kodak Company where he managed sales, marketing and technical support for Kodak products and services.

Currently managing director of Goldcrest Post,  Rom has more than 40 years of experience in post-production. He began his career painting stages and fixing lights at Unitel Video and later became a colorist. He joined DuArt in 1984 where he moved into management and eventually led the facility.