By Water an America ReFramed First 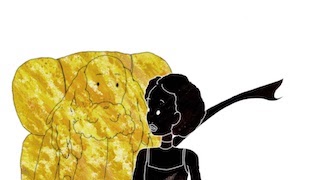 The film By Water, directed by Iyabo Kwayana, is an official selection of the Animation Short Film Program at the 2023 Sundance Film Festival. By Water, will also be the first animated experimental film to appear on America ReFramed. The short film follows an unlikely hero's journey into his own memories and becomes a vehicle for reconciliation and healing for himself and his sibling.

The film was produced by BlackStar Projects’ founder and chief executive and artistic officer and former American Documentary board member, Maori Karmael Holmes.

A co-production of World Channel and BlackStar Projects, By Water will debut as part of the 11th Season of the television and streaming series launching in February on World Channel.

“America ReFramed has a long legacy of supporting, showcasing, artist-driven films spanning American culture, race, healthcare, politics, civil rights and religion,” said Erika Dilday, executive director/executive producer of American Documentary | POV. “With the addition of Iyabo Kwayana’s visual work, By Water to our catalog, the series has another form of storytelling to present to our audience.”

“Presenting By Water in America ReFramed is an exciting opportunity that enhances World’s partnership with Iyabo Kwayana and BlackStar Film Festival,” said Chris Hastings, executive producer for World Channel at GBH in Boston. “Ten years ago, World Channel partnered with American Documentary to create America ReFramed, shaped by a desire to tell the many stories of a diverse and changing America. By Water is a proof point for this success, as recognized by Sundance.  We are thrilled to be able to share this film with audiences across the country.”

Based on a true story, the film was written and inspired by Kwayana’s personal experience.  After an unexpected voicemail three years after his disappearance, Kwayana made the decision to heed the instructions of her brother’s message and create By Water as a way to complete her brother’s story.”

In 2020, World Channel partnered with BlackStar Film Festival for the second annual BlackStar Pitch, an annual grant focused on documentary short projects. Kwayana’s By Water won the top prize and a $25,000 co-production deal from World Channel. The award was handed out at a ceremony held during the festival.

Kwayana is an independent filmmaker and cinematographer who uses sensorial and immersive techniques in cinematography, directing and editing in order to amplify the more discreet, often hidden aspects of film narratives, compelling viewers towards an immersive, supra-sensorial, and transformative experience.