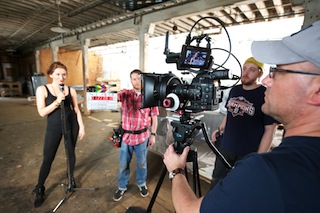 Shooting in northwest Chicago, within an old 1900s box warehouse for Lauren Santee’s music video, Let Down, provided some challenges for producer/director Kevin Otterness. “From the original wood floors to the old-fashioned light fixtures, this location had everything we were looking for in terms of the overall look and feel for the video,” he says. “One of the challenges of this location was with the power for lighting so we brought in a generator. The other was getting into those old tight hallways and corners with the camera. Having the [Vinten] Vision blue5 on set helped get into those areas with ease.”

Otterness shot with a Canon C300 and a variety of lenses. The Vision blue5 handled the package with ease. “The Vision blue5 is lightweight and easy to move around on set,” he says. “The drag, pan and tilt are very smooth and it has a great counterbalance range. Jeremy Weiden, my first AC, was in charge of setting up the camera from scene to scene and he had great things to say about the blue5.”

“Like you would expect from any Vinten head, the blue5 smoothly flew the Canon C300 package,” Weiden told Otterness. “The locks also felt really secure. When I locked down the camera, I didn’t worry about it shifting; which I can’t say for all tripods.”

This is Otterness’s first use of Vinten. During pre-production he was searching for a system that would be able to handle the workload of a fully cine-style rigged camera and “one that would be able to handle the normal abuse that comes with working on a set day after day,” he explains. “As a director and DP on this music video, I wanted something that could easily go from a whip pan to a nice smooth tilt movement. The ‘infinitely variable’ LF drag system was perfect – and a must for me when shooting a music video.”

Otterness owns and operates Posthouse Pictures, an independent production company based in Chicago. He produces and directs independent films, music videos and behind-the-scenes documentaries. His latest, Let Down, by Lauren Santee is presently in post-production and will be released to various social media outlets and iTunes in early fall, 2013.