Taking PlantPure Nation on the Road 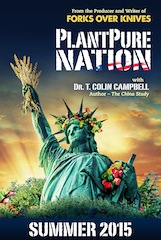 Dr. T. Colin Campbell, best-selling author of The China Study, and his son Director Nelson Campbell, are teaming up to preview the feature-length documentary PlantPure Nation.  The forthcoming film examines the political and economic factors that suppress information on the benefits of plant-based nutrition, while making the connections of this idea to larger issues such as medical practice, farming, and food deserts. The promotional tour mirrors the film’s story of three people working to spread the word about one of the most important health breakthroughs of all time.

From April 4 to June 10 the Campbells will travel on a nationwide bus tour through 23 cities in the U.S. and Canada to screen and discuss the film with audiences.  The theatrical tour is being booked by Evan Saxon Productions (ESP). Events at the cinema will include a Q&A and book signings of The PlantPure Nation Cookbook authored by Kim Campbell.  A companion to the documentary, the book includes over 150 whole food, plant-based recipes and a behind-the-scenes look at the film. Also planned are meet-and-greet rallies and fan interaction that will be filmed for inclusion in the final cut of the film. Key cities to host rallies include Tampa-St. Petersburg, Toronto, and Washington, D.C.

The production team will also recruit PlantPure Nation ambassadors in each city to help build local interest in viewing the official release of the film, which is scheduled for the week of July 4th in the 23 toured cities toured. PlantPure Nation will continue to rollout in more than 100 cities following the initial opening.

The tour will be launched in conjunction with a special Kickstarter campaign  — running from March 15th to May 14th. The campaign is intended to raise additional marketing funds to bring the film to as many cities as possible after its initial launch.

“I look forward to traveling this country with my dad, bringing to people the health message he has spent his life researching, and I am proud to be joined by our talented film team,” said Nelson Campbell. “I am gratified to see the grassroots interest building around the science of plant-based nutrition, but unfortunately, many powerful interests continue to oppose this idea,” added Dr. Campbell.

A growing number of celebrities, athletes, TV hosts, and nutrition experts have promoted the plant-based diet in the past few years. Tens of thousands of people have documented their personal success stories since implementing the diet, but as more doctors and public officials become aware of the healing power of plant-based nutrition the question arises: Why don’t they share the information with their patients or the public? Tragically, there have been few official medical or state-sponsored efforts in the nation to support the life sustaining benefits of a whole food, plant-based diet.

PlantPure Nation was filmed across the USA and features Dr. T. Colin Campbell leading the list of world-renowned experts, doctors and authors who speak on the topic. The Production team includes Producer John Corry & Writer/Director Lee Fulkerson from the acclaimed documentary film Forks Over Knives.