From Stage to Event Cinema Screen 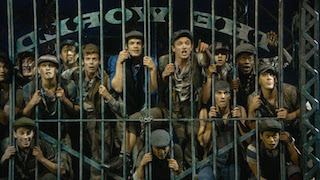 Disney’s Newsies: The Broadway Musical, a special limited engagement cinematic event directed by Brett Sullivan for Disney Theatrical Productions and Fathom Events, debuts this month in theaters worldwide. Co-founders of Steam Motion and Sound, he and lighting director Clayton Jacobsen have a lot of experience in translating theatrical productions to the screen, including the musicals Billy Elliot, Miss Saigon, Les Misérables, The Phantom of the Opera, Jesus Christ Superstar and Andrew Lloyd Webber’s Love Never Dies.

Working in close collaboration with the Broadway shows’ Tony-nominated director, Jeff Calhoun, Tony-winning choreographer, Christopher Gattelli, lighting designer Jeff Croiter and original production team, Sullivan and Jacobsen, have re-envisaged the live theater experience for the screen. The duo re-lit and re-staged scenes to develop a new language for live theater in the cinema. Using onstage cameras carefully choreographed within the performance, they captured the sense of intimacy and emotional performances usually experienced only by patrons seated in the theater’s first row.

“Our aim,” said Sullivan, “was to represent Newsies faithfully, but filmicly and really allow the entire audience to connect to the piece through an enhanced emotional experience.”

“It’s got to be filmic because it’s going to be projected onto a big screen, but it also has to feel like live entertainment,” Sullivan said. “Those two worlds can be hard to reconcile. Often in live cuts, the cameras are all at the back of the room and you feel removed from the action. We want to get close, so close that you can see into the eyes of the actors. When you see the eyes of actors on the screen, the story becomes much deeper.” 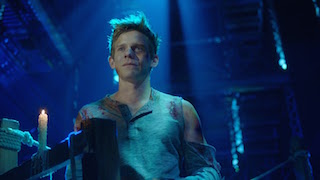 Sound and lighting are key to transforming a stage show into an immersive theatrical event. For Newsies, Jacobsen redesigned every lighting cue months prior to the shoot to make them suited to digital capture. “We work very carefully to preserve the integrity of the stage production’s lighting and staging while making them work for the camera,” Jacobsen said. “The result on the screen looks, sounds and most importantly feels the way the audience perceives the show in the auditorium.”

Recorded at the Pantages Theatre in Los Angeles, the production features members of the Tony Award-winning musical’s original Broadway cast, including Tony nominee Jeremy Jordan, Kara Lindsay, Ben Fankhauser and Andrew Keenan-Bolger, in the high-spirited tale of the Newsboys Strike of 1899. Disney’s Newsies: The Broadway Musical is produced by Disney Theatrical Productions.

After filming the show with a live audience in the theater, Sullivan and Jacobsen spent four days shooting individual scenes without an audience to capture close ups and angles impossible to capture live. The close-up material is woven seamlessly into the live show to produce the shifting perspectives of a movie. “It’s tricky to get the two to mesh, especially when you’re working with live vocals and a live orchestra where tempos and performances fluctuate,” said Sullivan. “Our editors, Marko Keser and David Tregoning, did a wonderful job.”

A similar technique was used for the orchestra and cast as film audio producer Lee McCutcheon blended pre-recorded elements with the live performance and the response of the very enthusiastic live theater audience. “It has the clarity of a pre-recorded track with the energy of a live experience,” said Sullivan. “It’s the best of both worlds.” 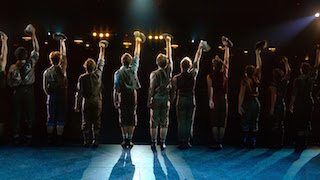 Sound and picture post-production was completed at Steam Motion & Sound’s facility in London. Following its limited theatrical run, the show will be released to television and home theater.

Disney’s Newsies: The Broadway Musical will introduce the musical to new audiences worldwide, while providing the show’s legions of devoted fans an opportunity to experience it in a new way.

“Producer Thomas Schumacher and his team were incredibly accommodating and supportive; they wanted to make a great cinema experience,” said Jacobsen. “And, the cast really delivered. It looks as great as it sounds and it sounds as great as it looks.”

Based on the Disney film written by Bob Tzudiker & Noni White