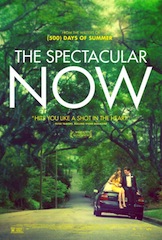 Here’s what’s spectacular about this movie: Shailene Woodley’s performance.  It’s so natural, so real, so filled with exactly the right honest gestures, nervous laughs, and insecure responses.  She brings matter-of-factness to her every line of dialog, a lonely teenager’s sensibility to everything she does on screen. We know that Miles Teller’s character will break her heart and we just don’t want that to happen. So, that’s my first expectation of a terrific movie: give me a character I care about, one whose story I want to follow.  My second expectation:  surround this character with others I can relate to who deepen the story and make it more interesting.  And finally, I expect and always hope that the story will take me places I haven’t gone, show me things I haven’t seen, give me ideas and insights I couldn’t have gotten any other way.  This movie delivers fully on my first expectations; it falls short on the other two.  It’s an independent movie without a daring sense of independence.  The script is co-written by Scott Neustadter and Michael Weber who also wrote (500) Days of Summer (I love that movie) and here they deal with the serious problem of teen-age drinking, but whenever they have an opportunity to go deep, they don’t. I wanted to love this movie; I just wish it had more of a story.  I wanted honest resolutions, serious consequences, not Hollywood endings; this movie lacks the courage to give me what I wanted.