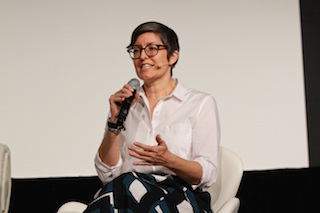 The Society of Motion Picture and Television Engineers today released details about the 2017 NAB Show's Future of Cinema Conference: The Intersection of Technology, Art, & Commerce in Cinema, produced in partnership with SMPTE. Scheduled for April 22-23 during the 2017 NAB Show, the conference will feature two full days of expert presentations delving into how technical innovation, artistic intent, and evolving consumption and business models will interact to shape the future of cinema.

"The diversity of topics and perspectives showcased in this year's conference sessions is remarkable," said Cynthia Slavens of Pixar Animation Studio, who serves as program chair for the conference. "From cutting-edge technology and creative techniques to questions about visual arts and the consumer experience, we've got it all."

"In the 21st century, cinema is evolving faster than at any time in its history," said Richard Welsh, SMPTE education vice president and CEO of Sundog Media Toolkit. "With consumers seeking content via many distribution outlets, creators are working vigorously to maintain artistic intent in an ever-changing landscape. The Future of Cinema Conference will explore the burning questions, with thought-provoking sessions and speakers, as we examine the future of movie-making and SMPTE's next century."

On day one of the conference, sessions will address topics including the use of the SMPTE Digital Cinema Package for distribution in a time of technical and creative innovation; the role of cloud technology in global distribution; the latest in cinema projection and displays, and how the industry is adapting to these advances; real-world implementations of Interoperable Master Format; the evolution and current status of immersive audio technologies and standards; and threats to content security and how to protect against them.

The second day of the conference will extend the conversation on content creation, as well as consumption and the consumer. It will tackle the impact of light field imaging on content production and feature a panel on high dynamic range. Sessions also will discuss topics such as consumers' changing relationship to the movies; the significance of artistic intent to the consumer; the advance in augmented, virtual, and mixed reality experiences; and new styles of narrative and performance as showcased in select Sundance Film Festival entries.

SMPTE members may use code EP02 to take $100 off the NAB Show nonmember rate for a Conference Flex Pass registration or to get a free Exhibits Pass. The offer expires March 24.

More information about the conference is available at www.nabshow.com/education/future-cinema-conference.