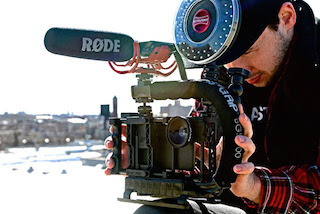 The Hollywood Section of the Society of Motion Picture and Television Engineers has announced that the increasingly popular practice of phoneography – the use of smartphones as image-capture devices in film and television productions – will be the topic of its September meeting.

The event is slated for September 14, at the Academy of Motion Picture Arts & Sciences Pickford Center for Motion Study’s Linwood Dunn Theater in Los Angeles. It will include special presentations on unique tools and approaches for creative success in using smartphones, tablets, and similar consumer devices to capture professional-caliber imagery.

“The smartphone has become an integral part of our ecosystem, and it’s now a viable tool for creating content,” said Marty Meyer, chair of the SMPTE Hollywood Section. “Forget big budgets and big iron; this is no-budget, in-your-pocket tech that is ideally suited for social media offerings. Phoneography — yes, it’s a word — is becoming a thing.”

Beastgrip chief executive officer Vadym Chalenko will present his company’s new mounting platform for iPhone and iPad devices. He will discuss his success in using crowdfunding platforms, such as Kickstarter, to fund the development of the product and demonstrate the capabilities of these new tools.

Director and producer Sven Dreesbak will join Sean Lawrence, vice president of business development at Beastgrip, to demonstrate the use and application of new lenses and mounting platforms for phoneography. They will provide advice for achieving professional results with these emerging tools for image capture.

Tony Orcena, editor of the Emmy Award-winning ABC sitcom Modern Family, will discuss how phoneography was used in the production series. One episode from the show’s 2015 season was captured entirely using smartphones, tablets, and laptops. Orcena will describe the impact the devices had on production time, color correction, and workflow, as well as the adjustments that were necessary to the mobile operating system templates to accommodate resolution and framing.