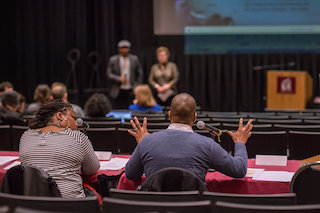 Showtime Documentary Films has signed on as a premier sponsor of the 2017 Big Sky Documentary Film Festival, partnering with the festival to make possible a wide range of diverse and compelling content, events and film industry opportunities.

Now in its 14th year the annual documentary film festival will take place February 17-26 presenting over 200 of the best nonfiction films from every corner of the globe. The festival hosts hundreds of filmmakers and offers a charismatic variety of events across Missoula’s charming venues.

Showtime Documentary Films has joined Big Sky as a Closing Night sponsor, presenting the new documentary American Jihad on February 26 at the Wilma Theater. The film explores homegrown Jihadism, and what can be done to prevent it. From Film 45, CBS Films, 60 Minutes and Jigsaw Productions, American Jihad was directed by Alison Ellwood and produced by Sarah Dowland.

The Big Sky DocShop is a five-day filmmaker’s forum that includes panels, workshops, and the popular Big Sky Pitch for works in progress. The 2017 DocShop filmmaker’s forum will focus the many aspects of short film: conceiving, funding, producing and distributing.

With changes in technology and how we consume media, short films have reached an unprecedented number of viewers and are affecting culture and inciting change at viral speed.

DocShop will include panels and workshops with New York Times Video, ITVS, The Atlantic, Film Independent, ESPN, Film Collaborative, and Tribeca Film Institute among other film industry experts, as well as master classes with the 2017 BSDFF retrospective artists.