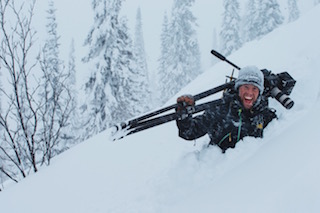 Preparations for a wave of winter sports action are in full swing at the Whistler, British Columbia production offices of Sherpas Cinema. Creators of the classic free-skiing films All.I.Can and Into the Mind, as well as sports-themed ads for Jeep, Ram Trucks, Audi, The North Face and others, the Sherpas expect big demand for the unique blend of artistry and technical chops they bring to winter sports filmmaking.

While snow likely won’t begin to fall in U.S. mountains for another two months, wintry environments can be found in late summer and early fall in remote parts of Western Canada. As a result, the region is a favorite training spot for medal-hopeful skiers and snowboarders, said Sherpas Cinema director Eric Crosland. “Mogul and halfpipe athletes train on the Whistler Glacier in August, “There are places high up in the Canadian Rockies that get snow in September and October.”

Like the athletes, the Sherpas are intimately familiar with the topography and weather patterns of the Canadian wilderness. As a result, they shift into full production mode in the fall in order to help brands get a jump—often literally—on winter ad campaigns. “We have access to sites that producers from outside the area don’t know about,” said Crosland. “We get snow-based advertising done in September.”

The Sherpas directed a Jeep campaign for 2017 X-games that featured world-class snow sport athletes and action. Nathan Monteith, executive creative director for the Jeep account at DDB Chicago, says they not only admire the team’s expertise in shooting action, they love the passion they bring to the filmmaking process.

“Working with Eric and his team of Sherpas was a breath of fresh air. Cold –41 degree fresh air,” Monteith said. “I don’t think I’ve ever worked with such a tireless team of shooters. It was confirmed that we made the right decision the moment I asked Jeff, the producer, where Eric was and he pointed up the hill at Eric – with camera on his shoulder – skiing down the hill behind a Jeep Wrangler that was plowing through four-feet of fresh powder at 45 mph. I guess when you have a team with this much talent you can afford to lose a guy. Kidding aside, these guys continued to over-deliver for us on Jeep and problem solved their way around just about any weather condition that was thrown at us, and if you’ve ever shot in the back woods of B.C. you know what I’m talking about.”

In 2014, The North Face contracted Sherpas Cinema to produce The Rise, a sprawling 13-part web series on the history of free-skiing. “Free-skiing was featured in the games in Sochi for the first time with slopestyle and halfpipe events,” said Crosland. “Our series took a documentary approach that looked at the roots of the sport and the personalities who created it.”

Winter sports filmmaking is a specialized field, requiring expansive technical skills and savvy for working in some of the harshest environments on earth. Sherpas productions often include aerial cinematography, drones, car rigs, cranes, time-lapse, slow motion and macro-photography. Their production team also has loads of logistical experience in getting star athletes and film crews into and out of remote mountain locations.

“Making sure everyone is safe is our priority,” said Crosland. “We also focus on shooting in a time-efficient manner. We understand and respect the restrictions of shooting action sports in the natural world where you’re dealing with big jumps and a lot of gravity.”

The hundreds of athletes who have appeared in Sherpas films and ads include several who competed in Sochi and/or will be on the slopes in Pyeongchang. Among them are Canadian freestyle skier Mike Riddell, Canadian snowboarder Spencer O’Brien, French snowboarder Xavier de la Rue and American snowboarder Kaitlyn Farrington. Crosland says that he and his crew find it easy to connect with athletes because they, too, are passionate skiers and snowboarders.

“We speak the same language and come from the same subculture,” he said. “It means a lot to the athletes that we understand their sport and what they are trying to achieve. They know that we aren’t going to put them in a position that misrepresents their sport or that jeopardizes their safety or broader goals.”

The rapport the Sherpas have with athletes shows up not only in the spectacular action sequences featured in their films, but also in more intimate scenes. “We capture the human side to these great competitors,” Crosland said. “How they live and what they do when they’re not training. Our knowledge of their sport puts them at ease.”

Sherpas Cinema’s films have earned numerous awards and they have been lauded as the best action sports filmmakers of their kind. The passion and adrenaline that they bring to the screen has also won them repeated assignments from leading advertising agencies. “A lifetime of skiing, climbing, biking and traveling through the mountains has gained our team intimate knowledge and respect for the high country,” said Crosland. “With over 200 days per year spent filming in mountains around the globe, we have ironed out the unique logistical parameters involved in this type of production. From conceptual commercial spots to Himalayan expeditions we are the team for the job.”