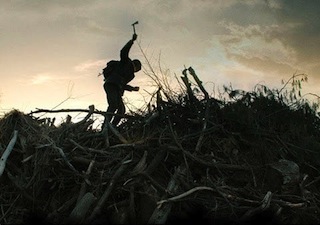 Final post-production for Hunter of Invisible Game, the new short film from Bruce Springsteen and Thom Zimny, was completed at The Room, the finishing boutique located within Technicolor-PostWorks, New York. The Room’s Ben Murray conformed the film and applied the final color grade, working in collaboration with filmmaker Thom Zimny, who co-directed with Bruce Springsteen.

Hunter of Invisible Game, which debuted this month on Bruce Springsteen’s website, is based on an extended version of a song from the album High Hopes and was created as a gift for his fans. Springsteen also stars in the film, an impressionistic story of a lone traveler making his way through a post-apocalyptic wasteland.

“It’s a project Bruce and I had been talking about for a year,” recalls Zimny. “We expanded the music by giving it an opening, making it a piece of about 10 minutes. In the cutting room, we pushed the film to be something that isn’t a straightforward, linear narrative. Rather, like the music, it evokes feelings that keep the storyline open.”

Zimny and Springsteen shot the video in northern New Jersey, including on the grounds of an abandoned World War II era military base. The old fort’s crumbling structures and overgrown landscape provide the backdrop for the film’s powerful score.

“It’s a sprawling military complex with interesting contrasts between nature and decay,” recalls Joe DeSalvo, the film’s cinematographer. “You have weeds, tree branches and other natural elements pushing up through concrete and rusty metal.” 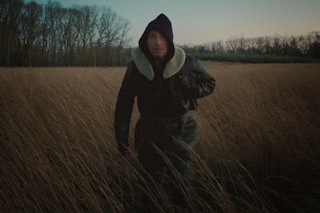 The imagery throughout has a cinematic quality with many broad vistas of windswept fields. The lighting is soft and subdued. The editorial rhythm is graceful and deliberate. The poetic quality of the visuals was further enhanced during grading sessions at The Room. “I set an initial look on the set with the DIT,” recalls DeSalvo. “Once we had a cut together, Thom and I looked it over and I gave him my notes; The Room took it from there.”

“I like to filter the camera and determine the look through the lens to give the colorist an indication of where I’m going,” DeSalvo adds. “He can then back off on it or add to it. On this film, I used chocolate filters, sepia filters and diffusion. We tweaked it with the DIT on set, then Ben took the final step, applying the polish. He did a great job; he nailed it.”

Murray work with Zimny during grading sessions and had previously graded his documentaries on the making of the Springsteen albums Born to Run and Darkness on the Edge of Town. “I’ve known Ben for 15 years and, much like I have with Bruce, I’ve developed a shorthand with him,” says Zimny. “I can come in with a new project and feel comfortable that he is going to bring something to it that I wasn’t expecting.”

For Hunter of Invisible Game, Murray and Zimny used color not only to enhance the look of the film, but also as a narrative tool. Their aim was to sharpen the emotions of the story, which, at its core, is about a man’s “hunt” to recover his lost humanity. “Bruce and I feel that a key part of the storytelling is how the image ends up,” says Zimny. “And that’s why I come to Ben. He finds the place that we were trying to reach.”

Murray says that he finds Zimny’s experimental approach to color invigorating. “What I love about working with Thom is that it’s all about the process, the journey,” he observes. “He doesn’t come into the room with answers.”

“Thom has a unique focus and vision, which he comes to me to enhance,” Murray adds. “I am there to help him bring it to fruition. At the end of the process, I help him achieve what he envisioned at the beginning.”

The added time and attention applied to the film in post paid off, says Zimny. On his website, Springsteen calls Hunter of Invisible Game “one of our best.”

“A big part of our excitement about this film is in its cinematic quality, and a lot of that was found in the color correct,” Zimny concludes. “Ben has the ability to go through it shot by shot and find the texture and the soul of what is needed. Often it was in the smallest details, minute things, but they added up. I walked out with a piece that was better, a more powerful film.”