Tomorrowland tells the story of a troubled and inventive teen (played by Britt Robertson) who seeks out a disillusioned inventor (George Clooney) to help her understand troubling visions she is having of an alternate reality. The story takes place in an imaginary future setting requiring extensive and creative use of visual effects to be realized on the screen. Rodeo FX worked directly with ILM to complete its work, including an innovative solution for the escape sequence.

Casey Newton (Robertson) arrives on the doorstep of Frank Walker (Clooney), looking for answers to her questions. Soon the farmhouse is surrounded by officers who have come to take her away, believing she is a fugitive. The duo escape in Frank’s homemade bathtub-pod, which launches like a rocket, just as the house explodes. The pod shoots through the dawn sky, finally landing in a lake where it sinks. After climbing out of the water, the pair hop on a motorbike they find hidden and complete their getaway. The house, silo, pod, and its plasma trail are all CG, while the background environment is a digital matte painting. 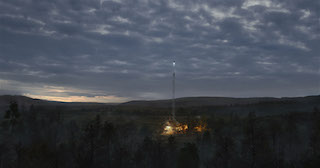 “We really enjoyed working on Tomorrowland, as it offered interesting technical and artistic challenges that required our expertise in various fields, such as compositing, matte painting, CG, and practical shoot,” said Ara Khanikian, VFX supervisor at Rodeo FX. “Combining all these different elements to create a seamless shot is definitely one of the team’s greatest strengths.”

Rodeo FX built a precise reproduction of the real house, a maquette that was five feet wide and four feet tall, then loaded it with a balance of explosives – gunpowder for black-grey smoke and naphthalene to create a realistic explosion. Two cameras captured the action against a greenscreen.

“We tested to get the smoke and the size of the explosion to fit the scale of the house,” explained Khanikian. “We also determined the right amount of debris and how to synchronize a rapid succession of detonations to achieve the right effect.”

For the flight of the bathtub pod, Rodeo FX used the background production plate, which had the camera following the desired trajectory for the escape pod hitting the water. Then the team generated a CG camera takeover for the beginning of the shot where the camera needed to be much higher to show the farmhouse and its surroundings as it explodes, and then follow the CG pod as it shoots into the air before crashing in the lake. Rodeo FX created the fully digital environment, enhanced the plate, and augmented the water splash. The surface of the lake was also enhanced to show the effects of the sinking pod. The entire scene was also color corrected to look like early dawn.

Rodeo FX created a sequence in which Frank, as a boy, flies using a jet pack, for which they replaced and enhanced the sky, added a CG jet trail, stitched plates, and added practical debris and particles to show the boy’s point-of-view as he flies through grass and over a fence, before crash-landing into a cornfield.

For a sequence with the principal characters in the Eiffel Tower, Rodeo FX took plates of actors shot against a blue screen, then stitched live plates from the production shoot in Paris and re-projected them as a matte painting.

“We always enjoy collaborating with ILM, and we had a lot of fun working on Tomorrowland,” said Sébastien Moreau, president of Rodeo FX. “We’re fans of Brad Bird and proud to have contributed to one of his films.”