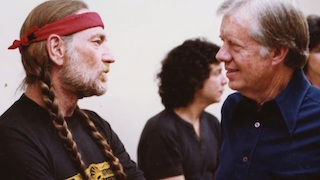 Jimmy Carter: Rock & Roll President, the new feature documentary from Grammy Award-winning director Mary Wharton, producer Chris Farrell and writer Bill Flanagan, will make its world premiere April 15 as it opens the 19th Tribeca Film Festival in New York. The rockumentary-flavored film, which went through post-production finishing at Sim Post New York, centers on the 39th president’s life-long passion for music and rock’s contribution to his unlikely journey from a peanut farm in Georgia to the White House.

Through an uplifting mix of interviews, archival media and live performances, the film explores Carter’s omnivorous interest in music spanning folk, soul, gospel, jazz and rock, as well as his close friendships with Bob Dylan, Willie Nelson, Gregg Allman and other notables. It also features rarely-seen performance footage, some shot at the White House, of Aretha Franklin, Ray Charles, Jimmy Buffett, Paul Simon and others.

“Music is connected to many of the major events of the Carter presidency,” says Wharton. “This film looks at the role music has played in the president’s life and extrapolates a larger point about the power of music generally. I think people will walk away surprised and with a new perspective on Jimmy Carter.” 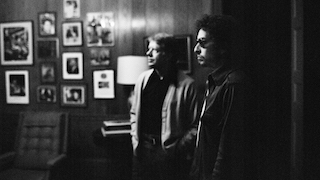 Source material ranged from newly recorded interviews—captured with 4K cameras—with Carter, his family members, political figures, musicians and others, to decades-old news footage, originating on various forms of videotape and film. One of the principal tasks for Sciarratta in finalizing the look was to blend the disparate source material to avoid jarring transitions. “We had to make TV footage from the 70s look good alongside film footage from the same era as well as contemporary interviews,” he explains. “As with many documentaries, we started with various visual sources and brought it together so that everything is smooth and consistent.”

Sciarratta also used color to heighten mood. “The interview segments were rich and contrast,” he says. “The DP (James Fideler) used side lighting to make those segments feel three dimensional and give them a warm glow. The rich, final look matched the personalities of the people and the friendly tone of the story.” He adds that one of his favorite parts of the film was an interview with Carter and his son Chip, conducted at the Jimmy Carter Presidential Library in Atlanta. “It has a wonderful, moody vibe,” he says.

A lot of the source material was supplied by the Jimmy Carter Presidential Library in Atlanta. “It was originally shot on 16mm film and we had it transferred to 2K,” notes Wharton. “It looks beautiful. Rob did a great job of taking material from all the different sources and making it flow so that nothing looks out of place.”

Pelino, who has worked on numerous projects for Wharton over the years including on CNN’s The Wonder List with Bill Weir and VH-1: Legends, faced similar challenges in editing and mixing the soundtrack. The film is filled with outstanding musical segments with highlights including Willie Nelson singing Georgia on My Mind, the Allman Brothers performing One Way Out, and Aretha Franklin singing the National Anthem (the latter recorded at Carter’s inauguration).

As many of the source elements were affected by age or wear-and-tear, Pelino used restoration tools (including Isotope’s RX7 audio repair software) to fix damage and remove noise. “I knew the songs really well and how they were supposed to sound,” Pelino says. “So, I was able to EQ them, bring them back to life and make them sound great.” 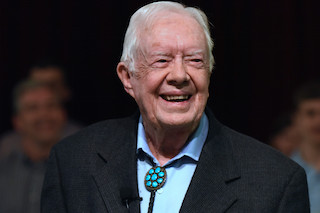 One of the most memorable musical moments occurs in the film’s opening scene. In it, Carter turns on a phonograph in his living room and plays Bob Dylan’s Mr. Tambourine Man. The music coming from the phonograph was added by Pelino in post, and the song continues to play as the opening credits appear over images of Plains, Georgia.

“It’s a fantastic start to the film,” says Pelino. “We filtered the music, adding a needle drop and surface noise, to make it sound as though it is coming from the phonograph. We then open it up full as we transition to the credits.”

The audio portions of some interview segments required special attention. Interviews were recorded in diverse locations and under disparate circumstances and, as a result, their quality and background ambience varied. “We shot in different towns, often with local crew and using different mics and other gear. We were always under time constraints,” explains Wharton. “Yet, in the end, Sue made it sound like it was all recorded in the same room.”

Wharton spent two years making Jimmy Carter: Rock & Roll President. While she faced numerous hurdles and a limited budget, she says she was able to bring it to fruition with the support of individuals and companies who responded to its upbeat message. “Making a film like this is a risky business,” she says. “When you’re out there pounding the pavement, it’s important to have a few people in your corner. Sue, Rob and Sim were among those who were there for me, and this film. That was a nice thing.”