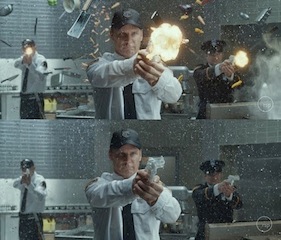 Rising Sun Pictures’ contribution to Twentieth Century Fox’s X-Men Days of Future Past centered on a time-bending sequence in which Quicksilver (Evan Peters) displays his hyper-speed abilities with spectacular effect.

In a scene set in a Pentagon kitchen, Quicksilver runs about the room at lightning speed in order to foil a group of security guards. As he does so, the camera enters his world so that everything around him comes to a virtual standstill. Guards and mutants appear frozen. Cooking gear, cutlery and vegetables hang in midair. Sprays of water droplets from an overhead sprinkler system fall in surreal slow motion. Bullets inch across the room toward Xavier and Wolverine. Capering gleefully along walls and over cooking stations, Quicksilver alters the scene, repositioning and disarming guards and plucking bullets out of the air.

The slow motion sequence is an astonishing blend of live action, computer-generated objects and extensive visual effects. Rising Sun Pictures collaborated with VFX supervisor Richard Stammers and director Bryan Singer to realize the creative vision of the sequence through the production of scores of CG props, including frying pans, knives, pots of boiling soup, carrots and bullets, as well as the omnipresent cascades of water droplets. Each of these elements needed to be rendered in near microscopic detail, placed precisely within the geometry of the kitchen and choreographed to move and react realistically to lighting, other objects and characters. 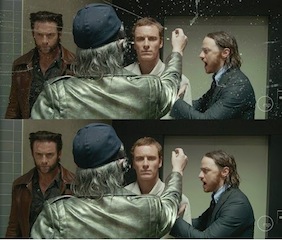 Rising Sun Pictures also aided in integrating the speedy Quicksilver into the near frozen environment. That illusion was accomplished through a combination of live action, a stunt double, green screen photography, a partial CG body replacement and a shimmering “rain tunnel” that forms around Quicksilver (caused by his swift passage through the near motionless falling water). All of this had to work properly in 2D and stereo 3D and, of course, dazzle the eye.

Singer describes Rising Sun Pictures’ contribution to the film as “Truly! Amazing! Work! It’s not easy to be ground-breaking and funny,” Singer says. “The work turned out incredible. I’m so proud of the sequence. I really believe that what you guys have accomplished is something truly special thanks for being super stars!”

“The kitchen sequence is undoubtedly the most memorable and awesome sequence in the movie,” adds Stammers. “Every nuance from the plastic bullet emerging from the gun barrel to the bell pepper rolling out the door has been crafted with an attention to detail so high, that people will watch this sequence with wonder for years to come.”

With more than 100 features under its belt, Rising Sun Pictures has developed a rock solid workflow that enables it to manage large and complex visual effects projects with peak efficiency. “We build on what we’ve learned from previous shows,” says Rising Sun Pictures visual effects supervisor Tim Crosbie. “We’ve been challenged in the past in terms of asset management and through those experiences we’ve built systems to manage complexity and revisions. It’s one thing to create a lot of assets; it’s another to be able to control them and know that nothing is going to break.”

Crosbie adds that pulling off a sequence like Quicksilver’s romp through the Pentagon is more than a matter of managing data. It also requires a flair for the dramatic. “This work is grounded in realism," he says. “Even though it’s a fantastical event you still want to feel as though you are there. The biggest challenge is to find that balance between an exciting, magical event and one that looks real.”