A Riot of Color 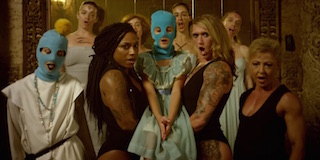 A hip-hop feminist anthem, Straight Outta Vagina is set in a church and a tiled bathroom (the actual shooting location was the Ace Hotel in Los Angeles) and includes a cast of children, dancers and female body builders. “It’s about the power of female sexuality,” says producer Matthew McCluggage. “It reminds men where they come from.”

Color is used creatively in the video to set the trippy, celebratory mood, establish locations and reinforce the band’s brand. “We drew out the gold in the classical design of the theater to give it the feel of a Russian Orthodox church,” explains McCluggage. “We played against the green in the tiles of the bathroom scenes and went for a warmer look in the mirrored shots. Overall, we emphasized the blues and the yellows, the band’s signature colors.”

“It’s a strong look,” adds Chernoff. “Phillip and I worked hard on the church scenes and are very happy with how well they turned out. We used a grain tool throughout to give it a filmic look—that’s something I often do with Phillip’s work.” 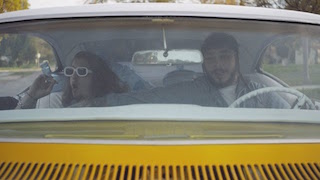 Chernoff also applied the final grades to Love is Mystical from the Cold War Kids and Burning Man from the rapper Watt (featuring Post Malone). In the former, most scenes are presented in reverse motion and colored in soft, dreamlike tones. “The goal was to capture that feeling of a first kiss, or first falling in love,” Lopez explains, “the way time can stop, move backwards and you get totally lost in that mystical moment.”

Burning Man, meanwhile, casts Watt and Post Malone as deliverymen who lace an office water cooler with LSD igniting (literally, as it turns out) a wild party. Chernoff says that he and Lopez had fun adding a psychedelic cast to scenes of office workers dancing in piles of shredded paper and covered in Post-It notes. The video climaxes with a man running down a hall after he has been set on fire. “We made the fire super-hot to make it feel more real,” Chernoff observes.

McCluggage observes that Alex is a valuable creative partner as he understands intuitively the visual aesthetic Lopez is seeking to achieve. “Alex has really refined his craft,” he says. “And, as a young artist, he relates well to the music and contributes great ideas during post.”