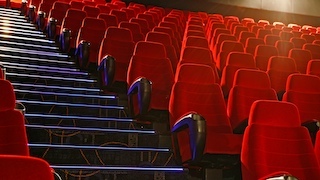 “Looking at sightlines in 3D from the eye of the patron is an important consideration,” says architect Theresa English, AIA, of TK Architects International in Kansas City, Missouri. “Previously, we would look at a single section from a single vantage. It wasn't super effective if the rows or screen or both were curved.”

Among the tools that English and her associates work with today is Autodesk Revit, a building information modelling software tool for architects, landscape architects, structural, mechanical and electrical engineers, designers, and contractors.

“Starting in 2009 when we first started exploring Revit, my earliest use was looking at sightlines in 3D,” English said. “When the market started exploring recliners in 2012, we did studies to see where people could see the screen from reclined positions and created families using information from seat vendors to understand what people could see but also when people may be in the projection ray.”

As reclining stadium seating becomes the norm in cinema, the challenges for architects have increased. English laughs when she calls those challenges “a great 3D puzzle in a box.” 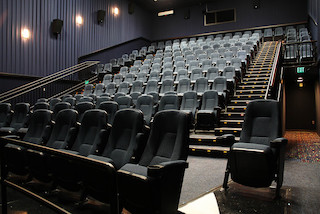 One of the earliest examples of stadium theatres in exhibition was the Princess Theatre, which opened in Honolulu in the 1920s. It had sharply raked rows of seats from the front of the screen towards the ceiling. But for movie theatres, stadium seating really started to take off during what some people have called the AMC Era. It began in 1995 with the AMC Grand 24 Theatre in Dallas. The cinema’s construction was a marvel of its time, featuring 24 movie screens and stadium seating to match. Prior to the AMC Era, sloped floor style theatres were the norm, but Dallas’ AMC Grand 24 Theatre changed everything.

“Big is cool,” was the advertising tagline for the AMC Grand 24 when it first opened. The theatre was the first megaplex in the US and was inspired by a 30-screen theatre in Antwerp, Belgium. At the time the late film critic Roger Ebert toured the theatre and told the Dallas Morning News, “I was tremendously impressed with the theatre. It has great sightlines from each part of the auditorium.” The theatre closed in 2010 and was taken over by Studio Movie Grill.

By 1998, during what was then the National Association of Theatre Owners annual national convention ShoWest, the precursor to CinemaCon, a Los Angeles Times reporter covering the event wrote, “Today, industry officials predict that stadium designs will replace traditional theatre seating within a decade. Nearly 100 percent of new theatre construction is now stadium-style, and the owners of many existing theatres are looking to upgrade.” 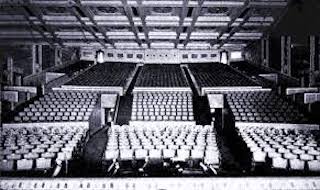 The Times’ article added, “A workshop held here this week on how to retrofit theatres with stadium amenities drew a standing-room-only crowd of about 350. Those in attendance said installing the new seating was, for them, a matter of survival.”

Although I was unable to find any statistics about the number of theatres that have stadium seating today, anecdotally I can say that, in my area, the only theatre I know of without stadium seats is the local arthouse and its new owners plan to add them as soon as possible.

However, the widespread adoption of reclining seats has not made the task of installing them correctly any easier, says English, adding, “there are so many factors to consider.”

Those factors include the number of different manufacturers and the different styles that each company offers. Then there is the motion of each individual seat and, when reclined, where does the moviegoer’s head end up? What is the distance in front of the chair? And what is the size and shape of the auditorium, and its drops and walls and landings.

Add to that, industry standards and local codes and you can begin to see the many details involved. For her part, English embraces the industry standards and the local codes. She sees them as a framework in which to work. “We know those parameters,” she says. That said, she noted that, especially in smaller cities, the local codes for movie theatres are very outdated and include rules regarding the proper ways to handle film stock safely.

While every project is unique, English says she typically develops a plan that includes a first draft for the placement of the chairs which she sends to the construction manager. It tells him or her, “This is sort of where we think [the seats] should go.” Undoubtedly, that placement will need to be refined once the seats are physically on site.

Projects usually start on a Sunday night after the last show. The construction team does everything it can to complete the installation process as soon as possible to minimize how many screenings an exhibitor will miss. In the past, that has typically been as little as one working day. Times have changed.

One is the availability of staffing of both the construction crews and the city departments that oversee the work to see that it follows the codes. The other is the ongoing backlog in shipping. Consequently, currently, the construction process can take two or three times as long as before the pandemic.

When an auditorium reopens, chances are patrons will appreciate the comfortable seats but will not understand everything else that it took to enrich their moviegoing experience. That’s fine for English, who says, “If we’re doing our job right, people shouldn’t notice.”