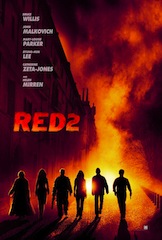 It means Retired, Extremely Dangerous, so maybe this is what happens when you give old people unlimited access to ammunition and an almost incomprehensible plot: they destroy everything in sight – and neither you nor they have a clear idea exactly why. But perhaps a real storyline is too much to expect; maybe it’s enough that the cast seems to be having a lot of goofy fun and their purpose is just to take everyone along for the ride.

The story here involves a thirty-year old covert operation, code-named Nightshade, that smuggled a portable nuclear device into Moscow. Now, the device has gone missing and there’s a whole flock of assassins trying to find it – and kill each other in the process. For their age, the actors look fit and fight well.  None of them seems particularly interested in following any sort of script; instead, they’re happy just to jet all over the world, shoot it out in high-speed chases or slug it out in close encounters, blowing up everything – and everyone – that gets in their way.

If you’re looking for fresh ideas, emotional performances, or a movie that pays attention to continuity and character development – don’t come looking for any of those here. What you’ll find instead is over-the-top acting – with an emphasis on action and ammunition, mostly delivered by card-carrying members of AARP.