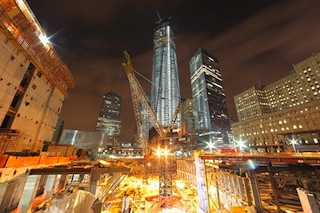 On this, the thirteenth anniversary of the terrorist attacks on New York City and Washington, D.C., Rebuilding the World Trade Center, Irish artist and filmmaker Marcus Robinson’s remarkable documentary about the reconstruction of the New York City landmark, makes its U.S. premiere tonight at 6 p.m. on History.

More than eight years in the making, the two-hour television special is the result of a labor of love both on the part of Robinson and Technicolor-PostWorks New York, which has been providing critical support for the project from its earliest days.

Robinson, renowned equally for his architectural cinematography, photography and fine art, placed more than a dozen cameras around the site to capture the construction process in time-lapse. He also recorded scores of interviews with workers involved in every aspect of the effort. Stop motion sequences of Robinson’s site-inspired drawings and paintings serve as a framing device for the powerful narrative.

“The film is an allegory or parable about the human spirit,” says Robinson, who recently received a BAFTA Award for an earlier version of the film that aired on the U.K.’s Channel Four. “The reconstruction of the site, which occurs over many years, is an amazing story, one that’s stirring and inspiring.” 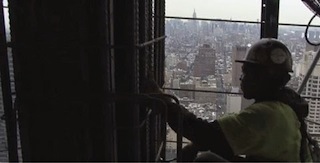 Technicolor-PostWorks became one of Robinson’s earliest allies in making the documentary. The facility donated a host of services to the filmmaker including workflow and technical consultation, editorial facilities, film processing, film archiving, dailies, editorial conforming, color correction, and sound services.

“Technicolor-PostWorks was very generous and gracious in their support, providing whatever was needed to keep the project alive,” Robinson says. “We felt very confident that we were in safe hands from a technical point of view.  Their participation helped make this film possible in a multitude of ways.”

Initial work included processing 16mm and 35mm time-lapse film at its New York City laboratory, and dailies transfers at its post facility in Soho. The latter involved color correcting the voluminous time-lapse material, which spanned the eight years and comprised over a million frames.

“Marcus wanted all of the material to be beautiful and usable,” recalls colorist Eli Friedman. “So we spent time color correcting all of the film to a near-finished form at the point of the dailies transfer.” 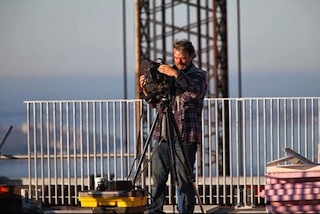 Providing the time-lapse sequences with a consistent look was challenging, Friedman notes, due to immense variations in lighting and weather conditions over months of shooting from any single vantage point. “Marcus shot through all seasons and all types of weather,” Friedman says. “There were snowy days, rainy days, rainy nights. In New York, you can have a beautiful blue sky and an hour later, it’s totally whited out. It wasn’t possible to just set a look and run with it.”

Friedman addressed the issue by creating a gallery of hundreds of still frames as reference points and by using transitional color correction to mirror changing light and contrast patterns.

Editorial also began early on. Editor Leo Cullen, who worked, in part, independently and, in part at editorial facilities supplied by Technicolor-PostWorks, says that simply storing, logging and organizing source material, produced with a variety of film and digital cameras, was a big job. He adds, however, that there was nothing random about the material that Robinson captured.

“He shoots very carefully,” he observes. Cullen ultimately cut both the Channel Four and History versions of the film, and was also in and out of Technicolor-PostWorks cutting several shorter pieces for use by the Port Authority of New York and New Jersey, the 9/11 Memorial and Silverstein Properties, developer to the World Trade Center project.

Cullen says that from the two feature-length versions, Robinson’s intent was to tell the story of the construction project from the construction workers’ point of view. He wanted the film to be a forward looking and hopeful message.

The memory of the terrorist attack, however, remains a palpable presence and the tragedy is honored in the film in numerous ways. “Marcus began shooting in 2006 and that became the beginning of the story,” Cullen says. “But in the end we do address 9/11. It’s seen through the building of the memorial, through the beams of light and through the memories of the workers.” 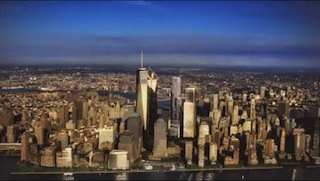 Technicolor-PostWorks’ Sean R. Smith performed final color correction and editorial conforming from the panoply of film and digital sources. Smith took the film through the finishing process twice, once for the U.K. version and, more recently, for the extended version debuting on History. In both instances, Smith recalls, finishing work was done with a light touch.

“Marcus liked the authenticity of the footage he had and wanted to stay true to its natural look,” Smith says. “He had a strong vision for the work that flowed from the material and seemed to sense what he wanted to accomplish from the very beginning. It was quite inspiring.”

A similar naturalistic approach was applied to sound mixing, performed by re-recording mixer Christopher Koch. Koch says that considerable care was taken to eliminate the extraneous or distracting sounds from interview segments, many of which were conducted on-site, but that the myriad vocal idiosyncrasies of interview subjects were preserved. “We always opted for the more natural choice in terms of inflection,” Koch recalls.

Although work on the project extended over a period of years, interest among the staff at Technicolor-PostWorks never waned. Rob DeMartin, the facility’s COO, says that the film held special significance for the company, noting that the original Twin Towers stood in direct line of sight of its Soho headquarters on Avenue of the Americas. “The events of that day continue to resonate with all of us,” he recalls.  “We were grateful for the opportunity to participate in Marcus’s project, and help him tell this amazing story.”

Robinson continues to have cameras set up at the World Trade Center site and plans to carry on shooting new time-lapse and interview material through completion of reconstruction. At that time, he plans to produce a final version of the film that he hopes will have both a theatrical release and be kept on permanent display as part of the 9/11 memorial.

“The belief that I had in this work inspired the people at Technicolor-PostWorks and many others to believe in it as well,” Robinson says. ‘There is something in its message about human resiliency and our capacity to rebuild from disaster. There is a creative spirit that all human beings share and want to celebrate, and this film has been able to channel into that.”