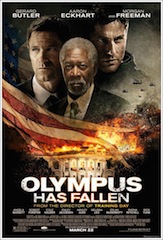 The plot is a bit preposterous and some of the violence is way, way over the top, but this is actually a well made, if copycat movie.  It will remind you of so many others – the original Die Hard comes to mind – but the movie does get you thinking about the kind of decisions the President (or, in this case, the ‘acting President’) has to make – and for the first time in a very long time, I actually liked Gerard Butler in a role.  Since statisticians keep track of just about everything else, someone should keep track of the amount of ammo expended per movie.  The amount used in this movie has to be on the level with ‘The A-Team’ or anything starring Bruce Willis or Sylvester Stallone, or both.  I swear -- the opening ‘take down’ of the White House must have taken at least a half-hour of screen time, although the Koreans responsible claimed it was done in thirteen minutes. And then there was another long battle near the end and lots of individual firefights in between and, well, this is a brutal, high body-count movie.  For me, one interesting aspect of this film is that it was shot by Conrad W. Hall, the son of my all-time favorite cinematographer, Conrad L. Hall, who shot Butch Cassidy and the Sundance Kid but other than that, there is really nothing in Olympus has Fallen you haven’t seen before, so this is not a movie to rush out and see, but it’s not awful.  Maybe sometime in the future, it could be a rental.